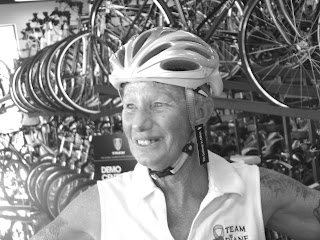 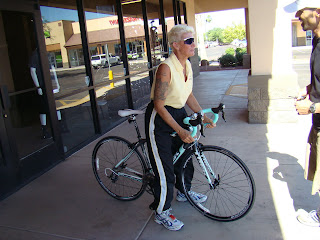 Quartzsite has brought National attention lately with it’s political strife, police investigations and negativity. I wanted to write this article and give the citizens of the area something to focus on that would inspire and bring about a bit of good things that are going on right under their noses. It is a story of survival and one that will inspire you to be better then what you are.

Last year I met my friend Diane shortly before she had a terrible bicycle accident that ended up airlifting her to Phoenix and almost losing her leg. Being an athlete and long distance runner it looked like she might not ever run again alone walk the same way. After months of recovery she was on her way to having the seven pound rod and screws removed from her leg when she hit a bump in the road. She was diagnosed with stage four metastic breast cancer and she began the fight of her life--that of survival and recovery.
Several friends joined together and we formed Team Diane. We wanted to be a support group to pray, drive to doctor appointments, listen, encourage and to be there to help Diane with her journey since she had no family except her dog, Mariah. This journey of friendship and support has changed each and every one of our lives and has made us stronger, and brought us to facing our own challenges. We have been INSPIRED by Diane’s courage, her ability to meet a challenge head on and to move forward with such a positive attitude.


On Tuesday, August 9th Diane Rowello
will leave from Rainbow Acres at 5:00 AM
to head to Peoria on her bicycle to attend her final chemo therapy session before her breast surgery.
She wants to commemorate this stage of her journey to recovery with a bicycle ride and
make this phase a positive and memorable event in her life.
When she makes up her mind to do something there is little that stops her.
If you want to cheer her on and send her off, line the sides of Cholla Road and give her the send off she deserves.
I know it is early for all of you but it is never too early to do something that will change your life--BE INSPIRED!!
Posted by Quartzsite at 3:01 PM