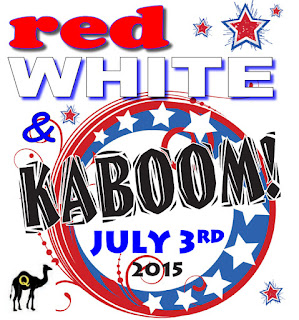 Family Fun & Fireworks is being planned for Friday, July 3rd at the Town Park Pavilion.

Once again the community will be gathering to celebrate Independence Day. Our celebration this year will be on Friday July 3, 2015.

Quartzsite Transit newly named The Camel Express (by popular vote) will be providing transportation to the activities. Please call Town Hall at 928-927-4333 prior to July 3rd to make reservations for transportation.

Fireworks will start shortly after 9:00 pm.

All community groups are welcome to set up a tent or displays sharing their information and events.


Quartzsite, AZ - Roy Lee Barnhart, also known as "Waterboy Roy" was arrested in Sacramento, California in connection with the May 31st stabbing of one male and female victims in Quartzsite, Arizona. 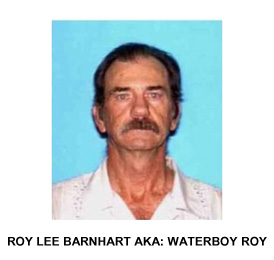 QPD Detectives Mike Lancaster and Hilario Tanakeyowma filed the below mentioned complaint/charges with the assistance of the La Paz County Attorney’s Office Deputy County Attorney Kellen Marlow and obtained a signed felony warrant from Judge T.W. Carnevale located at Justice Court #4 for two felony counts of Aggravated Assault with a Weapon/Dangerous Instrument and two felony counts of Disorderly Conduct with a Weapon/Dangerous Instrument. There may be additional charges to follow.

The stabbing took place on Sunday, May 31, 2015, when, around 8:00 AM, QPD was called to the scene of a fight where a male and female were stabbed by another older male suspect later identified as Roy Lee Barnhart AKA: Waterboy Roy at the Cactus Patch Mobile Park located in Quartzsite, Arizona.

A male victim was bleeding with a deep single stab wound to the lower back area. A female victim received minor cuts from the suspect’s knife. The Quartzsite Fire Department was dispatched to the scene where the male stabbing victim was airlifted to the West Valley Hospital in Phoenix with a serious stabbing injury.  The male victim has since been released from the West Valley Hospital and is recovering from his injuries.

Witnesses observed the fight between the two individuals, whereas the witnesses identified Roy Lee Barnhart AKA: "Waterboy Roy" as the person who stabbed the male and female victims and fled from the scene. Chief Renfro assigned Detective Hilario Tanakeyowma to conduct a follow-up interview with the victim at the West Valley Hospital in Phoenix and obtain his medical condition. QPD worked late into the night attempting to locate the stabbing suspect Barnhart,

Chief Renfro would like to thank the community members in advance for your assistance in the capture of Roy Lee Barnhart AKA: "Waterboy Roy."

The Quartzsite PD is dedicated to working hard to protect our citizens and visitors.
Ernie Renfro
Chief of Police Town of Quartzsite
Office: (928) 927-4644
erenfro@ci.quartzsite.az.us

Posted by Quartzsite at 6:31 PM

Quartzsite First Assembly of God Church provides the youngsters with a meal each day. Staff and volunteers have worked countless hours to provide an education and fun summer program for the youth. The 6-week Summer Program started Monday, June 1st and runs through July 9th. For more information, visit ci.quartzsite.az.us. Or call Quartzsite Town Hall at 928-927-4333.

Posted by Quartzsite at 3:04 PM