Quartzsite, Arizona - In a 5 minute Special Meeting held today at 1 pm, the only item on the agenda was "to rescind the appointment of Jennifer Jones from the Planning and Zoning Commission."

For the first time, Jones offered the invocation, which surprised many in attendance. Foster said there might be another lawsuit, and suggested they adjourn and not take any action. Council Member Mark Orgeron made the motion, and Council Member Mike Jewitt seconded.

Jewitt sponsored the item and had originally nominated Jones for the Commission. Jewitt stated he "did so in the hope that involving her in the governance of the town, it would possibly help her to understand how the Town is run. It seems I was wrong."

Late Tuesday, Jones "served" a Notice of Claim to the Town of Quartzsite. The special meeting was called Wednesday morning. See below for details:

Another interesting document for today's meeting reveals that Jones has still not filed her Campaign Committee Termination Statement for the May 2012 election:


Another document (see below) released to Quartzsite Town Council members today reveals Jones' emails sent to Arizona Attorney General's Office communicating as a Planning and Zoning Commissioner. Bruno states Jones "should have provided a copy of her email to the Town Clerk's office as well as to the other P & Z Commission members."

In a Facebook posting earlier this week, Jones openly advocated to "recycle the 'Mess' [Desert Messenger, Quartzsite's FREE Community Paper] by the bundle and the armload".  Desert Messenger, the publisher and contributing photographer are often targets in Jones' editorials, articles and political cartoons.

Jones publishes a tabloid in Quartzsite, however she holds no business license. She has stated multiple times that she doesn't need a license to "give away free papers." However, Quartzsite Town Code 8-2-1 states, "It is unlawful for any person to carry on any trade, calling, profession, or business... without first having procured a license from the town."

Nationally there have been over 500,000 copies of free student newspapers stolen since 2000, according to records complied by the Student Press Law Center. Colorado law makers are currently considering a bill to reclassify the theft of free newspapers.

Being such a vocal proponent of Free Speech, and a publisher of a free paper, surely Jones must be aware of the many articles against newspaper theft listed on First Amendment Center's website:  http://www.firstamendmentcenter.org/tag/newspaper-theft 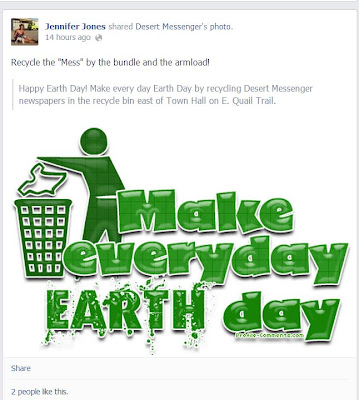 Posted by Quartzsite at 6:28 PM 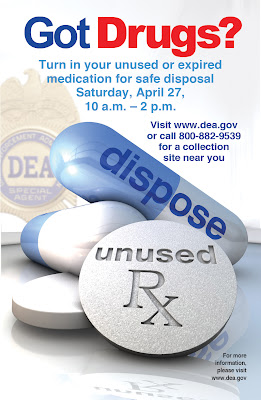 PHOENIX – With public participation at an all-time high after five prior events in two years, the Drug Enforcement Administration (DEA) and its state, local, tribal, and community partners will hold a sixth Prescription Drug Take-Back Day across the state on Saturday, April 27th.  Collection sites are open 10 a.m. to 2 p.m. local time.  The service is free and anonymous, no questions asked.

Quartzsite residents can participate be dropping off their expired, unused, or unwanted prescription drugs to the Quartzsite Police Department between 10-2pm on Saturday.

The Quartzsite Substance Abuse Prevention Coalition (QSAPC) has brought substance abuse awareness to the community on a wider scale than had ever been present in prior years. With members from local Civic and Community Leaders through formalized training under SPF-SIG, the QSAPC began and remains committed to changing local conditions that contribute to substance abuse. To learn more visit  http://www.ci.quartzsite.az.us/Qsapcoalition/Quartzsite_Coalition_Summary_Doc_2011-12.html

The public has embraced the opportunity these Take-Back Day events provide to prevent pill abuse and theft by ridding their homes of potentially dangerous expired, unused, or unwanted prescription drugs.
“Arizonans responded overwhelmingly to DEA’s five previous Take-Back Day events, disposing of over 35,000 pounds of pharmaceutical drugs in the past two years, “said DEA Special Agent in Charge Doug Coleman.  “We know that young people consider controlled-substance prescription drugs like Vicodin to be a safer way to get high, but they couldn't be more wrong.  By removing unwanted prescription drugs from their homes, the public helps prevent experimentation, addiction, overdose and even death.”
Unused medications in homes create a public health and safety concern, because they are highly susceptible to accidental ingestion, diversion, misuse, and abuse.  Rates of prescription drug abuse in the U.S. are alarmingly high--more Americans currently abuse prescription drugs than the number of those using cocaine, hallucinogens, and heroin combined, according to the most recent National Survey on Drug Use and Health.  The majority of abused prescription drugs are obtained from family and friends, including from the home medicine cabinet, according to surveys of users.

The public can find a nearby collection site by visiting www.dea.gov, clicking on the “Got Drugs?” icon, and following the links to a database where they enter their zip code.  Only solid medicines may be turned in.  No liquids, injectables or needles will be accepted.

Four days after DEA’s first Take-Back event 30 months ago, Congress passed the Secure and Responsible Drug Disposal Act of 2010, which amends the Controlled Substances Act to allow an “ultimate user” of controlled substance medications to dispose of them by delivering them to entities authorized by the Attorney General to accept them.  The Act also allows the Attorney General to authorize long term care facilities to dispose of their residents’ controlled substances in certain instances.  DEA is in the process of drafting regulations to implement the Act.

If you’re a parent, please take the time to talk to your children about the harm caused by medicine abuse and educate yourself on the signs of abuse.  Please visit DEA’s interactive website for further information, www.justthinktwice.com and www.GetSmartAboutDrugs.com.
Posted by Quartzsite at 10:44 AM 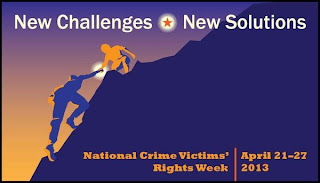 
These dedicated people made remarkable progress for crime victims, despite many challenges. Only 30 years ago, crime victims had no rights, access to crime victim compensation, or services to help rebuild their lives. They were often excluded from courtrooms, treated as an afterthought by the criminal justice system, and denied an opportunity to speak at sentencing.
Through decades of advocacy and hard work, we have come a long way. Today, all states have enacted crime victims’ rights laws and established crime victim compensation funds. More than 10,000 victim service agencies help victims throughout the nation. Every year, states and localities receive millions of federal dollars to support these services.
National Crime Victims’ Rights Week reminds us that many challenges remain. Crime victims’ rights are not universal and are often not enforced. Only a small percentage of victims receive crime victim compensation, which is usually limited to victims of violent crime. According to last year’s National Crime Victimization Survey, more than 50 percent of violent crimes were not reported to police in 2006-2010. In addition, a 2011 report called the Use of Victim Services Agencies by Victims of Serious Violent Crime showed that only 9 percent of violent crime victims received needed services in the 1993-2009 time frame.
Advocates also face a host of new challenges as they strive to provide culturally competent services for increasingly diverse populations (e.g., seniors, teens, immigrant populations) and victims of newly prevalent crimes (e.g., trafficking and technology-related stalking and identity theft). As funding sources decrease, providers must target their services even more strategically.
“New Challenges. New Solutions. captures our mission in the 21st century,” said Joye E. Frost, Acting Director, Office for Victims of Crime (OVC), U.S. Department of Justice. “As reflected in OVC’s major strategic planning initiative, Vision 21: Transforming Victim Services, we must craft a new vision for reaching all victims of crime. We can achieve this only by substantially broadening our thinking, strategically planning our future, and creatively expanding our resources and tools.”
National Crime Victims’ Rights Week will be held April 21–27 in communities throughout the nation. In Washington, DC, the U.S. Department of Justice will hold OVC’s annual Service Awards ceremony that month to honor outstanding individuals and programs that serve victims of crime.
OVC encourages widespread participation in the week’s events and in other victim-related observances throughout the year. For additional information about 2013 National Crime Victims’ Rights Week and how to help victims in your community, please contact the Megan Spielman at the La Paz County Attorney’s Victim Services Division at 928-669-6118, or email at mspielman@co.la-paz.az.us. For more ideas on how to volunteer to help crime victims, visit the Office for Victims of Crime website, www.ovc.gov.
Posted by Quartzsite at 3:51 PM

Boston, you are in our prayers 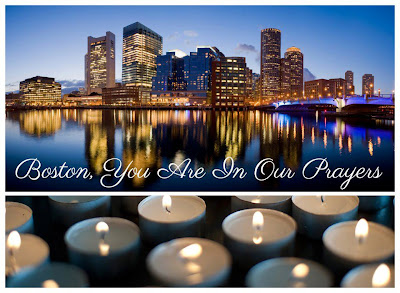 As the sad news of the Boston Marathon tragedy unfolds on the television and Internet,
our hearts and prayers go out to those who are suffering today.

Please be mindful of jumping to conclusions and be sure to get your news from credible sources.
Be wary of scams which happen after tragedies.

Stay up to date on http://www.Facebook.com/DesertMessengerNews

Posted by Quartzsite at 3:22 PM