Due to the winter storm rolling in to the southwest, the Quartzsite Chili Cook-off and Salsa Challenge will be rescheduled for Saturday, March 5th. Same time, same place! Noon at Town Park!

The cookoff will coincide with Proud Neighbors of Quartzsite's Rock Auction! Still working on quickly changing event, so stay tuned for more information! Chili and rocks! Should be a fun day!
Posted by Quartzsite at 6:45 PM

YUMA - The Arizona Department of Transportation will be sealing pavement cracks along State Route 95 between Quartzite and Parker, beginning Tuesday. A 19-mile stretch of SR-95 immediately north of Quartzite will be paved first beginning Tuesday (Mar. 1) and should be completed by mid-March. After that segment is completed, then crews will begin sealing a 9-mile stretch of the highway near Parker.
What to expect during construction:

•Work will take place weekdays from 7 a.m. to 5 p.m.
•Crews will direct motorists through the work zone during work hours.
•Motorists can expect delays of approximately 15 minutes near work zones.
•The project is expected to be completed by end of March 2011.
•ADOT will notify the public of scheduled closures as more information becomes available.

As always, drivers are reminded to proceed through the work zone with caution, slow down, and be alert for construction equipment and personnel.

ADOT works to inform the public about planned highway restrictions, but there is a possibility that unscheduled closures or restrictions may occur. Weather can also affect a project schedule. To stay up-to-date with the latest highway conditions around the state, visit the ADOT Traveler Information Center at www.az511.gov or call 5-1-1.
Posted by Quartzsite at 6:16 PM

I just received a what looks like two invoices/statements in the mail from Domain Registry of America. Their prices are expensive and after doing some research I found out what a scam this is!


Even though the letter states, "This is not a bill" buried deep in a paragraph, some folks have fallen for the official looking invoice.

These “invoices” are a scam. Domain Registry of America  has been cited by the FTC for “deceptive conduct”. http://www.ftc.gov/opa/2003/12/domainreg.shtm

If you received one of these letters, please ignore it! Do NOT complete the payment slip at the bottom or make any payments to this company. Also the letter has their address listed as: 2316 Delaware Avenue #266 Buffalo, New York. With some quick help from Google maps, the address comes up the same as the UPS Store, so it's proablaby at mailbox.

I also received a notice from Website Listing Service. At least this one states in all caps and bold print that "this is a solicitation." Folks beware of invoices for services you have not ordered. Do your research and check prices before buying!
Posted by Quartzsite at 4:22 PM

Lane closures scheduled Thursday and Friday
at State Route 95 and State Route 72
Workers will direct traffic through the intersection
YUMA - The Arizona Department of Transportation will alternately close one of the two lanes at the State Route 95 and State Route 72 intersection south of Parker beginning at 7 a.m. on Thursday (Feb. 24) until 5 pm on Friday (Feb. 25). Workers will be present to direct motorists through the construction zone. The lane closures are necessary to provide a safe work zone as preliminary work for a new traffic signal begins.

ADOT will return in early April to continue working on the improvements and installation of the traffic signal.. The project is scheduled to be completed by summer 2011.

As always, drivers are reminded to proceed through the work zone with caution, slow down, and be alert for construction equipment and personnel.

The construction project schedule is subject to change due to a variety of reasons, including weather, material availability and mechanical difficulties.

ADOT works to inform the public about planned highway restrictions, but there is a possibility that unscheduled closures or restrictions may occur. Weather can also affect a project schedule. To stay up-to-date with the latest highway conditions around the state, visit the ADOT Traveler Information Center at www.az511.gov or call 511.
Posted by Quartzsite at 9:54 AM


Yuma, Ariz. The Bureau of Land Management (BLM) Yuma Field Office will host a visit from BLM Director Robert Abbey on Monday, February 21, 2011. Director Abbey will be in the BLM Yuma Field Office looking at recreational issues in the area.

Director Abbey’s visit coincides with an America’s Great Outdoors event that was held yesterday at the White House. The America’s Great Outdoors Initiative, established on April 16, 2010, encourages partnerships with local communities to restore and protect the health, heritage, resources, and social and economic value of our nation’s lands and waters.

Director Abbey will tour several BLM recreation sites and will visit with the volunteers who assist with the management of the long-term visitor areas (LTVA). Media are welcome to attend the volunteer potluck luncheon scheduled from noon to 2 p.m. at the Imperial Dam LTVA ramada. There will be an opportunity to interview Director Abbey at that time. Directions to the site are: Take Highway 95 north to the Big Guns turn-off to Yuma Proving Ground. Take Yuma Proving Ground Road approximately seven miles to Senator Wash Road (you will pass Yuma Proving Ground). Turn right and follow it approximately 1 1/2 miles. Turn left on the dirt road marked with the “BLM Volunteer” sign. The ramada is approximately one mile west on the dirt road.

The BLM manages more land – 245 million acres – than any other Federal agency. This land, known as the National System of Public Lands, is primarily located in 12 Western States, including Alaska. The Bureau, with a budget of about $1 billion, also administers 700 million acres of sub-surface mineral estate throughout the nation. The BLM’s multiple-use mission is to sustain the health and productivity of the public lands for the use and enjoyment of present and future generations. The Bureau accomplishes this by managing such activities as outdoor recreation, livestock grazing, mineral development, and energy production and by conserving natural, historical, cultural, and other resources on public lands.
Posted by Quartzsite at 8:51 AM

There will be a special meeting of the Quartzsite Town Council on
THURSDAY, FEBRUARY 17, 2011 at 11:00 AM


Items on the agenda:

(it appears that 021711 – SP2 is on the agenda due to Mayor Ed Foster not signing the employment contract renewals that were passed by the town council on Tues. Feb. 8, 2011.)
Posted by Quartzsite at 5:05 PM

The primary focus of Operation Desert Guardian was to validate information provided by sex offenders during the registration and periodic re-registration requirements under Arizona State Law. Sex offenders not in compliance with state or tribal law were sent to appropriate agencies for further investigation. Certain cases may become federal investigations due to offenders violating the Sex Offender Registration Notification Act (SORNA) which is part of the Adam Walsh Child Protection and Safety Act of 2006.

On July 15, 2010, in accordance with SORNA, the Colorado River Indian Tribes established their own Sex Offender Registration Code (SORC). The new code mandated all sex offenders who are residing, employed, or a student must register with the tribal police department. A deadline of February 9, 2011, instructed all sex offenders on the reservation to be compliant.

During the course of the operation, a total of 118 compliance checks were completed which yielded in 2 non-compliant arrests. In addition, 14 arrest warrants were served within the reservation and La Paz County.

District of Arizona U.S. Marshal David Gonzales stated, “The primary goal of these types of operations is to monitor sex offenders to ensure they are complying with state, federal and tribal laws. There is a high recidivism rate among sex offenders, and arresting those in non-compliance greatly reduces the number of potential victims of sex-related crimes. “ 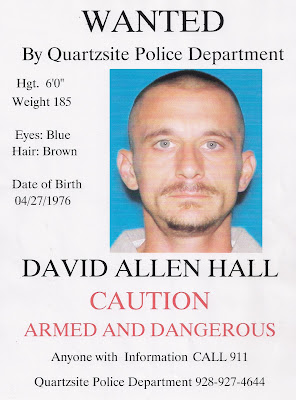 update:
SUSPECT APPREHENDED
FRIDAY MORNING
in Ehrenberg, AZ
Quartzsite Police Department is asking for the public's assistance in locating David Allen Hall. The police are warning people that he is armed and dangerous. If you have any information, contact Quartzsite Police Dept. at 928-927-4644 or call 911.
Posted by Quartzsite at 8:53 PM

Hello Everyone,
Just a heads up if you have a chance, live burns will start tomorrow 2-11-2011, at 1:00 pm. We will be burning cars first, here at the fire station in Quartzsite. Then at dusk, the propane Christmas tree, which will take place over at Quartzsite AWC.

Sunday, starting at 09:00 am we will be having live structural training at the old Airport Gardens Restaurant, Located on Kuehn Rd, just East of Love’s Truck Stop and Exit 17 in Quartzsite. (We will dine on pizza for lunch) As in the past, all of the cars, propane, and ultimately the burn building have been donated.

This is not the end of the academy however, we still have the wildland section of the academy to complete. If you are bored, stop by there will be adrenaline for everyone. Thanks,


1. Call to Order.
Discussion and possible action on the following item(s):
2. Discsion and possible action to go into Executive Session pursuant to A.R.S. §38-
431.03(A)(3) & (4) for the purpose of discsion or consultation for legal advice with the public body’s attorney(s) and to consider its position and instruct its attorney(s) regarding the  public body’s position regarding settlement alternatives relating to the Yakima Compost Company, Superior Court Case No. CV2003-0119.

5. Adjournment.
Posted by Quartzsite at 4:37 PM

John Wright of http://www.parkerliveonline.com/ reports minute by minute during the hearing held today at 1:30 pm at La Paz County Superior Court.
Attorney General called in, along with Wells Fargo representative. Standing room only crowd heard the arguements. Judge ruled the writs be quashed and the funds released.

Read all about it in John's words /http://www.parkerliveonline.com/
Posted by Quartzsite at 3:33 PM

Parker, AZ- On Wed. Feb. 2nd, the La Paz County Board of Supervisors held an emergency session to declare an emergency due to the writs of Garnishments placed by Yakima Compost. The county has been in disupute with Yakima for years. In 2007, Yakima received a decision that the county owes $9.2 million in damages. The county appealed the decision. Arizona Appeals Court upheld the verdict and judgment and the Supreme Court declined to hear the case. So the county explored at their options, but in the mean time, Yakima filed writs of attatchments freezing $11 million of the county assests. Employees are worried if they will receive their paychecks tomorrow.

Today at 1:30pm a hearing is being held at La Paz County Superior Court "to see what we can do about it," said a county spokesperson today. She also stated, "it should be very 'interesting'", as there are laws that protect funds for payroll, and funds belonging to other entities. Arguements will be presented to challenge the withholdings. The hearing is open to the public.

Below is the press release sent this morning regarding yesterday's emergency meeting:

"Chairman of the Board Drum recessed the meeting at 4:10 p.m. to attend a hearing scheduled at 4:15 p.m. in the Superior Court, 1360 Kofa Avenue, Parker, with Mohave County Judge Weiss."
Posted by Quartzsite at 11:33 AM