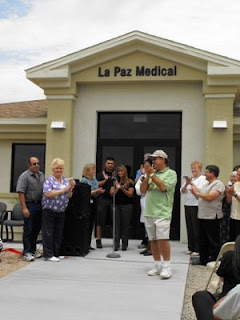 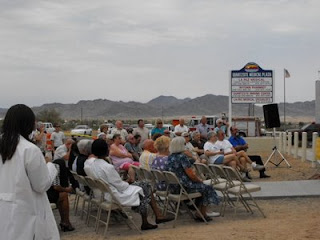 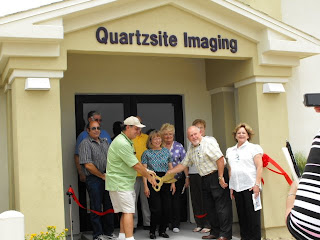 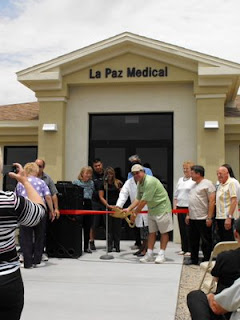 La Paz Regional Hospital hosted the Grand Opening and Dedication Ceremony of their brand new building Thursday, May 21st. The new building houses La Paz Medical and Quartzsite Imaging. In Town Pharmacy, located on the backside of the building, is currently undergoing a remodel, as well.
Quartzsite Chamber of Commerce Board Member, Jim McGovern, hosted the event with ribbon cuttings at both entrances. Wes Huntley gave the opening prayer, Vicki Clark, La Paz County Supervisor, Holly Irwin, Town of Quartzsite Council Member, Jose Lizarraga, La Paz Regional Hospital's Cheryl Montijo.
Refreshments and tours of the new facilities were made available to the folks gathered for the celebration.
Posted by Quartzsite at 1:28 PM

Tuesday, May 19, 2009 at 1:00pm the Quartzsite Town Council met to accept Mayor Walt Akin's resignation and to appoint to fill the vacancy and appoint the mayor. Mary Huntley said some very kind words to the mayor and presented him with a gift of art, explaining the meaning of the details. The council voted to accept the resignation with Bill Moore stating the only "nay" vote.

Council member Hal Davidson made a motion to put off appointment of the vacant seat until the next regular meeting, to make a better decision. There was much discussion and Davidson read a prepared speech. Vice Mayor Carolyn Guthrie strongly stated that "we will do this today!", because "I'm not going to be in town next Tuesday. I have a right to go on vacation!", although Council member Jose Lizarraga, the newest member on the council also stated his concerns about rushing in to a vote. Council Member Bob Kelley agreed, saying he did not know some of the names on the list, and was only notified of the meeting yesterday, as he was out of town.

Somewhere along the way, the council voted to put off appointing a mayor as well. Alex Taft wanted to know who would run the meeting on Tuesday. Past mayor, Richard Oldham stepped up the podium telling the council that according to their rules, it would go to the person with the most seniority. Council members agreed it would be Council member Huntley.

During the discussion, resident Ed Foster said that there was "some back door" and "private meetings" taking place to get some of the names on the list, that in the past the council had public notice for applications. Things really got heated in the room when Council Member Wes Huntley accused Ed Foster of "costing the town $12,000 unnecessarily" for the recall. Vice Mayor Carolyn Guthrie said some very strong remarks about Foster just wanting to be on the council. Foster then said he was retracting his name from the list. Resident Dean Taylor approached the podium and told the crowd, "this is the last time I'll speak in front of you". He said to the council "you people discuss me!" and said he will tell the "whole world how bad" it is here in town, which did not go over well with the council members. Council Member Huntley pointed out Dean Taylor was also "to blame for the $12,000 cost to the town".

There was discussion to have a lawyer present at the next meeting. A woman named Jade said as long as there was a lawyer present, that she would like her revision of the animal codes to be on the agenda as well.

In the middle of people shouting, one of the council members made a motion to adjourn and someone else seconded. But Vice Mayor Guthrie continued to allow the people to speak. I was also allowed to speck, however I was so saddened by the turn of events, that I got choked up and tears started to flow. As I started to say my heart was broken by what just took place, and that we just started a new organization called Proud Neighbors of Quartzsite , Council member Bill Moore got up and left, slamming the door behind him. I continued speaking and said, "I really want everyone to be proud to live in Quartzsite. I hope that everyone can work together, and be speak to each other in a good way." I told the council that I follow the Lakota way and would like to present an honor song. It was denied.

After I spoke, Angie Masales spoke about how the council is doing a great job and went around and shook hands with each council member. Police Chief Jeff Gilbert spoke about how we need to work together and speak with respect to each other.

After the meeting, Walt Akin shook his head saying, "it just all fell apart, they let it just fall apart." Many people stayed in the the hall and talked afterwards. Many shook Walt's hand and gave him hugs.

Bill Moore approached me afterwards as he reached for a copy of the Desert Messenger, saying, "my leaving had nothing to do with you." I replied, "although I was the one speaking". He told me that they had a motion and second to adjourn so everyone should have left. Vice Mayor Guthrie continued with the meeting, though, and I feel that should have been honored. Just my opinion.

I really feel Walt tried hard to bring the people together while he was the mayor. I felt his pain when things went so sour during this meeting. I am truly disappointed in the way some of the members of the council and the public behaved today. I hope that the future is brighter for the Town of Quartzsite!
Posted by Quartzsite at 3:35 PM 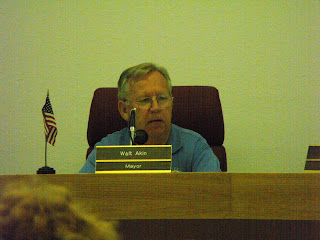 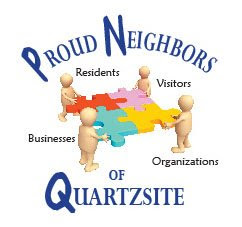 Quartzsite-There’s a new association in town! Proud Neighbors of Quartzsite is inviting the public to an organizational / brainstorming / round table discussion Friday, May 15 at 6:30pm at the Quartzsite Senior Center.

Proud Neighbors of Quartzsite (PNQ) is established to provide benefits to local charities and non-profit groups by promoting the community of Quartzsite, and the surrounding area, through quality local celebrations!

PNQ’s Treasurer, Angie Masales, said, "Proud Neighbors of Quartzsite would like to thank every person, business, and organization that we have talked to about our mission (Partnering together for a better community with businesses, organizations, residents and visitors. To celebrate southwest Arizona as an exciting, fun destination by providing events and opportunities unique to the area) and vision (The communities that play together stay together). Your support is greatly appreciated."

According to PNQ’s president, Starr BearCat, "Some things have not been working very well for the betterment, growth, and prosperity of the town and its citizens. If one keeps doing the same old thing and getting the same old results, it is time for a change and do something different. That’s why I got involved."

"Everyone is a neighbor! We want everyone to be a Proud Neighbor of Quartzsite!" said Shanana "Rain" Golden-Bear, PNQ’s Secretary. "We have many fun events planned where people will be be proud to live in and visit Quartzsite again!"

"We would like you to keep your ears and eyes open for interested parties from Cibola, Ehrenberg, Brenda, La Paz Valley, Rainbow Acres, and Bouse, and ask that you extend an invitation to them, for us, to participate in our discussions. We would like to be sure to include all of our Quartzsite Neighbors in any events and projects that we may undertake," Masales said.
Proud Neighbors of Quartzsite has simple roles, "Play Nice!" "In our actions we ask ourselves, How Does This Benefit the Community? How Can We Make Things Better for the People? We, at Proud Neighbors of Quartzsite, refer to the arena that we are playing in, as "The Sand Box." This is because it goes back to the teachings that we all learned in Kindergarten. Play Nice, Don’t Talk Bad of Others, Help Each Other and Share."

"I invite every one to come and play in the Proud Neighbors of Quartzsite Sand Box for be betterment of our chosen community," said BearCat.
A take on the group’s initials, PNQ, people are asked to "mind their P’s and Q’s"! Golden-Bear said the initials were not planned that way, but it serves as a great message for all "players".

Intersted folks are invited to join in their new social networking site, to stay in touch throughout the year, and a place to have a voice.
www.proudneighbors.ning.com

Posted by Quartzsite at 7:50 AM