What you need to know about coyotes 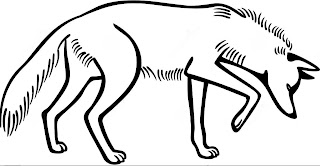 People who live in or visit Arizona can expect to see many species of wildlife. More and more often though, wild animals are venturing into areas where people live. Sometimes the wildlife becomes a problem, either by hammering on the side of the house, digging a den under the front porch, or eating all of your brand new landscaping plants. You can usually enjoy wildlife watching from a distance, but sometimes wildlife encounters involve conflict.

It is generally not normal for coyotes to attack or pursue humans; it is a learned
response to human feeding
or indifference.

Are Coyotes Dangerous?
On rare occasions, human-fed coyotes have bitten people. Although naturally curious, coyotes are usually timid animals that run away if challenged. Coyotes can be a risk to people once they become comfortable around humans, usually as a result of feeding or indifference. When this occurs, coyotes lose their natural fear and learn to see humans, their yards and their pets as food sources and safe havens. You must aggressively discourage coyotes from feeling comfortable around you and your family by never intentionally feeding coyotes, eliminating attractants (food sources, including pet food) from your yard, using aggressive gestures toward coyotes when you see them, and encouraging your neighbors to do the same.

Coyotes are wild canines that are clever and opportunistic. They are well adapted to living in cities, suburbs, rural towns and agricultural areas. When developments are built in their habitat, coyotes are not permanently displaced. Some move on to other areas, but many simply adjust to their new environment. Coyotes can be seen at golf courses, parks, preserves and in many neighborhoods — maybe even yours!

Coyote Traits and Behaviors
• Coyotes live throughout Arizona and in every state except Hawaii. Their range has expanded with the human removal of their predators, such as the wolf. • They weigh 15-30 pounds. Females are slightly smaller than males. • Coyotes eat whatever is available, including seeds, dates and other fruit, dead animals, rodents, rabbits, garbage, pet food, house cats and small dogs. • They breed every year. They have two to 12 pups per litter, with an average of six. Pups are raised in a den. • Coyotes may be seen in groups, called packs, or alone. • Removing coyotes from one area generally results in other coyotes moving in from surrounding areas and breeding faster.

What Should I Do If a Coyote Approaches Me?
Remember, the human is dominant and must act that way. Here are some things to remember: • Never approach a coyote. • Show you are dominant by keeping eye contact with the animal. • Yell or make loud noises with whistles, blare music, or bang on pots and pans. • Encourage coyotes to leave by spraying with a hose, throwing sticks or rocks near them, or shaking a can filled with pennies or pebbles. • Don’t stimulate a coyote’s chase instinct by running. • Pick up small pets. • Protect small children so they won’t panic and run.

How Can I Keep My Pet Safe?
Pets most likely to be endangered by coyotes are typically off-leash or smaller than 25 pounds. Coyotes have taken cats and small dogs in the vicinity of their owners and occasionally right off the leash. Coyotes have also been reported to attack larger dogs when the coyotes are in groups, or after one or two have lured a dog away from its owner.

Here are suggestions for keeping your dog or cat safe:
• Supervise small pets at all times when outside. • Allow pets off-leash only in enclosed areas. If your dog is off-leash, be sure it has immediate recall response to prevent conflicts with coyotes and other wildlife. • Take steps to keep coyotes out of your yard • If you see a coyote when walking your dog, let the coyote know you are there. Either gather your dog in your arms or keep it as close to you as possible, while also using some of the deterrents described above. Move toward an area of human activity. • Keep cats indoors or in a secure outdoor enclosure to protect them from coyotes, other wildlife (owls, hawks, etc.) and also from cars, domestic dogs and disease

How Can I Discourage Coyotes from Entering My Backyard?
If there is a regular coyote food source in one yard on your block, then coyotes will be active throughout the neighborhood. All potential food sources must be removed to keep the coyotes from becoming dangerously comfortable around humans. An indifferent attitude toward a coyote in your yard has the same effect as feeding it. If a coyote is in your yard, you need to make the animal aware it is not welcome. Here are some things you can do: • Do not feed wildlife. • Store garbage inside or in wildlife-proof containers. • Place trash containers outside at the last possible time on day of pickup. • Feed pets inside or remove uneaten pet food between feedings. • Keep pets indoors or on a leash. When outside, keep pets in a secure enclosure with a roof or supervise at all times. • Supervise small children. • Trim back plants and bushes around the house to prevent hiding or resting places. • Install outdoor lighting. • Reduce a coyote’s ability to get over a fence or wall by building it at least 6 feet tall, burying the bottom a few inches underground, and installing barbed wire, electric wire, or a pipe that spins around a wire on the top.

You can also make a “coyote shaker,” which is a soft drink can filled with washers, pebbles or pennies, wrapped in foil and taped closed. Shake the can to scare away coyotes. The combination of the light reflecting on the foil, the noise and the aggressive gesture of shaking it provides several deterrents. • Spray coyotes with water from a garden hose or large squirt gun filled with diluted ammonia (10% ammonia and 90% water).

What About Rabies? Coyotes can be rabid. However, the Arizona Department of Health Service’s records show an extremely low occurrence of rabid coyotes in the state.

Posted by Quartzsite at 4:15 PM