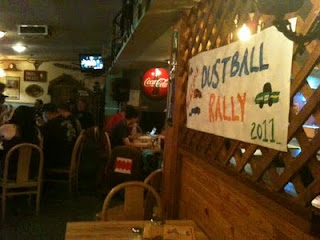 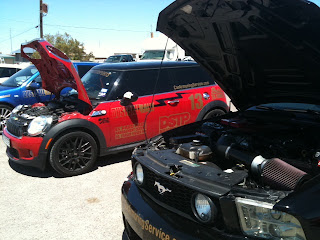 Silly Al's Pizza was a busy place today as the teams participating in the Dustball Rally stopped in for some delicious pizza today!
The Dustball 2000 (July 27 - 31) is a four-day, 2,000-mile,
scavenger-hunt-style road rally across the American Southwest.

The Dustball is a "gimmick rally," which basically means it’s a scavenger hunt! The teams don't know the route, except that it started in El Paso, Texas and will end in Las Vegas, with two mystery overnight stops in between. Each morning, the teams are handed a packet of clues they can use to find their way. The team that solves the most questions on the worksheet wins.
More than 30 cars are on the rally, many of the teams posting to Twitter. You can watch their live updates online at www.dustballrally.info and chat with Dave Maass, a San Diego writer and the Dustball's official multimedia diarist, who will be posting images, video and thoughts live from the backseats of several of the Dustball cars. There might even be some live video.
This project is viewable live in the San Diego Automotive Museum lobby.
Posted by Quartzsite at 5:06 PM