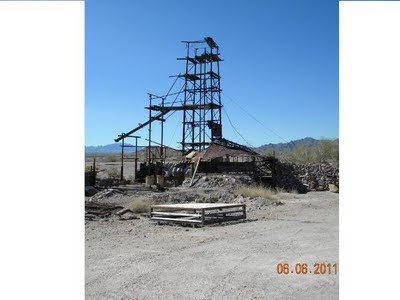 Abandoned Mines
Closed in Quartzite
Eighteen
abandoned mine shafts
and features
closed off or filled in.
In recent weeks, 18 abandoned open and dangerous mine shafts on Bureau of Land Management (BLM) public lands were closed in the town of Quartzite. Bat gates and cupolas were installed over the shafts which close access to humans but allow ingress/egress to bat populations.

Quartzite is usually small a small town, but during the winter months it grows to around 80,000 visitors who come to participate in the gem and mineral show during the months of January and February. The abandoned mine shafts, fill sites, and mine workings have been both attractive nuisances and public hazards for tourists and visitors.
“Visitors who are gold seekers look in existing shafts no matter how dangerous,” said BLM Colorado River District Hazardous Materials Coordinator Cathy White. “PRP Construction (Phoenix, AZ) did a fabulous job taking care of the hazards while retaining the historic flavor of the mining features. They installed ten cupolas and two bat gates, and leveled six mining fill sites.”


The BLM manages more land – over 245 million acres – than any other Federal agency. This land, known as the National System of Public Lands, is primarily located in 12 Western states, including Alaska. The Bureau, with a budget of about $1 billion, also administers 700 million acres of sub-surface mineral estate throughout the nation. The BLM’s multiple-use mission is to sustain the health and productivity of the public lands for the use and enjoyment of present and future generations. The Bureau accomplishes this by managing such activities as outdoor recreation, livestock grazing, mineral development, and energy production, and by conserving natural, historical, and cultural resources on the public lands.
Posted by Quartzsite at 9:22 AM