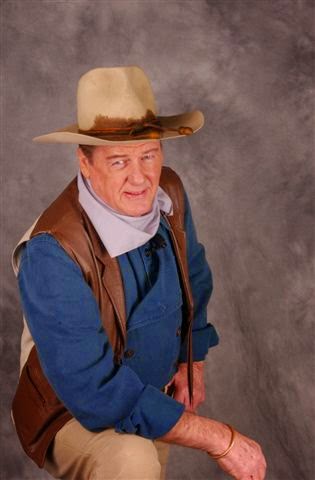 Ermal Walden Williamson, a man of the West, ex-stuntman for Universal Studios in Hollywood, California is also the John Wayne Look-alike and Impersonator doubling for the Duke in the Coors Light commercials He has been performing on Duke’s yacht, the Wild Goose”. ever since it has been rescued from almost going to Davy Jones’ Locker and continues to thrill people several times a month on board.  He has ridden in the Tournament of Roses Parade many times as John Wayne, and has performed many patriotic recitations at the Rose Bowl and other events preceding the parade.
He travels the world, appearing at corporate events throughout the country as host, emcee and/or entertainer.

As an entertainer, he is an after-dinner speaker and a key-note speaker, hosting conventions, performing at trade-shows, and emcees seminars. 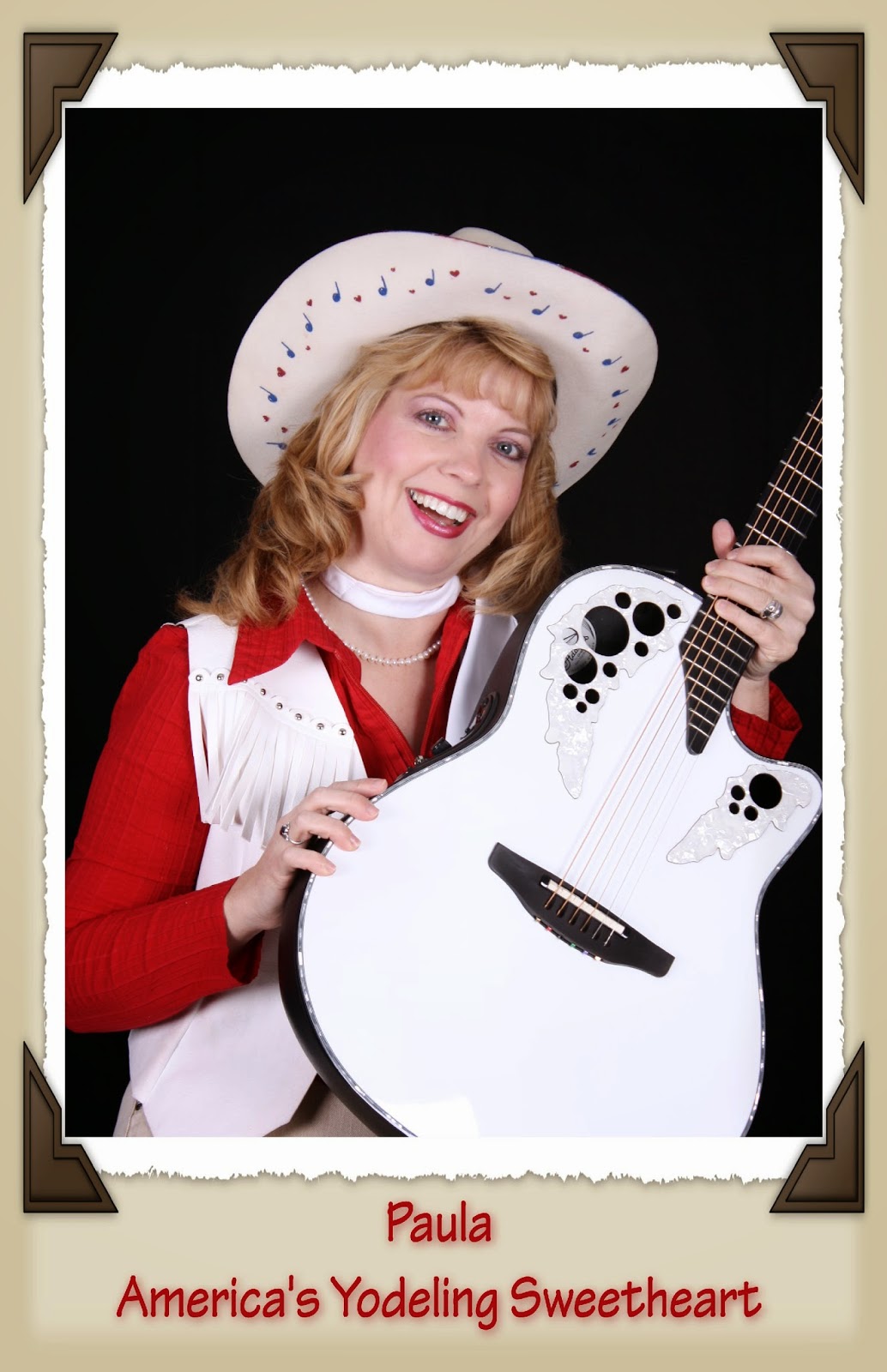 Ermal is the recipient of the 2003 IGCITA Best Male Impersonator of the Year Award in Las Vegas and is presently performing with Paula Erlene in the production, "An Evening with John Wayne and Patsy".  He is married to Paula Erlene who accompanies him in ;;the show.  She is a multi-national award winning female yodeler, perhaps the fastest in the world as America’s Yodeling Sweetheart and also a tribute artist to Patsy Cline; singing also to the tunes of many other female country-western stars.

They add all of their experiences in bringing to the audiences exciting anecdotes about Duke with Paula singing and yodeling, incorporating real Western history and folk lore while keeping their audience on the edge of their seats.  Their forte lies in performing for churches, RV parks, schools and theaters, as well as corporate and special events.  Together they have traveled far and wide.
He is an actor, author, entertainer, corporate host, emcee and motivational speaker, as well as a look-alike and impersonator.

Ermal was raised in a “mercy home”, similar to an orphanage, in Birmingham, Alabama when his father deserted his mother and the rest of his family just after he was born.  During WWII, his mother remarried and sent for him in the Motor City, old Dearborn, Michigan.  Like a typical boy, he ran away from home and joined the Marine Corps.  When he came out, he got his first job in the hot melt shop of a steel mill for 3-1/2 years working for wages at $1.72 per hour.  He made rent payments by working double shifts as often as he could.  While hoofing it through his childhood years, mostly on his own, this inspired Ermal to become an actor with visions of becoming another John Wayne.  He put his writing on hold, wanting to experience first hand what he was to write later down the road. He married the former Miss Elizabeth Mary "Betty" Patterson, of Wyandotte, Michigan and then moved his wife and two children, Elizabeth Mary and Ermal “Bill” to Hollywood, California to break into motion pictures.  To become the professional actor as he should, he studied and performed Chekov, Shakespeare, Wilde, Williams, and more playwrights although his heart and soul  was in doing Western films. Then one day, he performed in the lead role in a one-act play at California State University at Los Angeles, The Purification, using actions established by the Duke as a cowboy.  “I suppose no one knew it but me.”  His third child Daniel Walden was born the year before, and he continued to work full time and attend school at night and take some classes during the day to earn his degree.  It was important to him, as no one in his family of three brothers and three sisters ever earned a degree, let alone his mother or dad.  This Motivational Force kept Ermal grounded as he pursued every facet of his professional life while "home on the ranch" where he and Betty worked hard on instilling the American Work Ethic into their Family of three children, Elizabeth Mary, Ermal “Bill” and Daniel.

He took up more acting classes at Paramount Studios after graduating from college with a BS Degree in drama, and found himself with Jerry Paris, an acting coach who accepted the unbridled task of teaching him and who later, would become a close and devoted friend.. “Just before his passing away, Jerry told me that I would appear as a principle actor in his next film, a third sequel to "Police Academy".  Paris made for certain that Ermal was firmly planted on the set, constantly preparing him for his "Big Break”.  However, as Fate would have it, instead, Ermal was cast in the supporting role of Randolph Hearst in "The Patty Hearst" movie, playing opposite Natasha Richardson.
Ermal has performed in many types of films and plays. He appeared with Tom Hanks as his butler in Bonfires of the Vanity and has appeared in dozens of sitcoms such as a regular principle character on “Samta Barbara. In “The Twilight Zone”, “General Hospital”, “Superior Court”, “The Judge”, “Evening Shade” with Burt Reynolds, “Delta”, “The Golden Girls”, as well as movies made for TV such as “Woman Against Odds”, “Lies Before Kisses” and “The Black Hole” as well as lesser roles in many others.

He also recently starred in Star Quest a Sci-Fi movie opposite Burt Ward from the Batman series..
He has appeared on stage with Jean Stapleton, and Marion Ross. On Hollywood and Vine Ermal starred in Medea at the Stardust Grill and won rave reviews.

He wrote, directed and produced his one-man show “Memories with John Wayne and Gary Cooper”. Ermal is the actor who is doing all those “COORS LIGHT commercials as the Duke.  Duke's face is digitized onto Ermal’s body.  Fully utilizing his writing and acting talents, Ermal’s one-man show as the Duke is a composition where he scored and produced the Life Story of John Wayne (from the cradle to the grave) in entertaining anecdotes and yarns.  As a raconteur, Ermal is a frequent speaker, host and emcee at corporate events, supper clubs, seminars and organizations.  He performs as a professional host and emcee, giving motivational speeches about the Duke’s life and movies that encapsulate between 15 minutes to two hours in pure entertainment. He is a well-diversified man of many talents, culminating in one character:  the Western Cowboy, beloved by people around the world.

His life has been devoted to John Wayne in that he covers all aspects of his impersonation of JOHN WAYNE.  He does the talk, the walk, and the nuances in all facets of his very being on the screen.  He performs as Duke in weekly half-hour cable TV segments as the Duke in first person talking about his life, his movies, and giving personal anecdotes.  Ermal started out performing and continues to do exceptionally well as and, as the professional impersonator, is ready at the drop of a “Stetson” to impersonate him.

Ermal performed in Sonora, California on the location site of “High Noon” on location sites during the annual Sonora Film Festival, on Railroad Days in Jamestown at their famous Jamestown Railroad and High Noon sites along the rails of Oakdale.

He is an ordained minister with a Masters Degree from the Golden Gate Baptist Theological Seminary in Strawberry Point, California and a Doctor of Ministry Degree from the Fuller Theological Seminary in Pasadena, California, Ermal has been the pastor of three churches in the course of pursuing his acting career.  Again, as Fate would have it, shortly after his return to acting, Hollywood asked him to perform as the Gary Cooper double, and then, the John Wayne look-alike.  Having established himself in this rare niche, he can honestly say that his life-long dream has come true. FIRST COWBOY MINISTER of all time.

With an undisputed track record consisting of four degrees, two-and-a-half years in law school, Marine Corp experience, a rough-and-tough steelworker stint, cowboy stuntman thrilling the tour trams at Universal Studios, expertise on the Wild West, and a John Wayne and Gary Cooper impersonator, he has put his daily life-long experiences to work for him in all that he does, while remaining an humble and pious man.   His creative writings reflect his no bars philosophies.  Ermal does not hold back.  Moreover, as an ordained minister, he still conducts weddings as the Duke in Western or military wardrobes on location, in a church, or aboard Duke’s famous yacht the “Wild Goose".

Ermal has written patriotic poetry as: “John Wayne, American”, “Just a Piece of Cloth”, “America’s Kids Today”, and others that he recites on-stage and/or on horseback. Ermal has been told  throughout the years, (on more than a hundred occasions) that he is more of the Reincarnation  and Embodiment of the Great John Wayne than an impersonator, following in the footsteps of one of America's Great Heroes, inspiring those  around him by seeking his dreams in his own devout and dedicated way.

I tell you - his is the GREATEST PERFORMANCE OF AN IMPERSONATION THAT I HAVE EVER SEEN. And, most of you already know that I have been in the motion picture business ever since I was ten years old. . . . His act is not good - IT IS GREAT.  IT IS EXCELLENT!”  Ned Shaheen – Hollywood Producer

“Saw your TV show – Great. " - A Fan. Burt Kennedy.
The late Burt Kennedy was the writer and director of several of the best John Wayne movies.

To hone and perfect his writing ability, Ermal drew upon his rich life-time experiences and lessons learned by being a Marine, a steel man, a stuntman, and a man from the Deep South.  To date, he has authored seven Western novels with a single theme, BRAZOS.” “Across The Brazos", "The Man From the Brazos", "Call of the Brazos", "We Conquer or Die", "The Last Bullet", "The Ghost of Ginny McBride" and “Beyond the Brazos” are the seven books he has finished, respectively.


Ermal's goal is to carry the theme to new levels.   For those who are not fluent in Spanish or Basic Cowboy-ese, there is the River that runs some 870 miles through Texas.  It means, Arms of God" and is spelled out in his first novel, "Across the Brazos".  Legend has it that whenever a man and a woman enter the Brazos and the River churns up, it is a glowing Good Luck Omen that the Princess blesses the Couple with Love. Indeed, with this is the Life Story of a Man who has met and conquered his Glowing Brazos, inspiring and entertaining all those whom he meets and those that meet him.