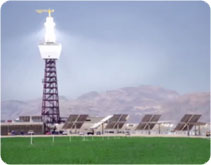 BLM Yuma Resource Management Plan
Notice of Intent to for a proposed Land Use Plan Amendment
The Bureau of Land Management (BLM) Yuma Field Office is considering amending a land use plan to allow the use of public land for the proposed Quartzsite Solar Energy Project in La Paz County, Arizona.

A Notice of Intent announcing the proposed amendment was published in the Federal Register on March 30, 2011. The land use plan amendment would be in conjunction with the proposed project.

The Notice of Intent, initiates the public participation and scoping processes for the National Environmental Policy Act (NEPA) process. A public scoping period of at least 30 days ends on April 29, 2011. At least two public meetings will be announced through the local news media, newspapers, and BLM’s Web site (http://www.blm.gov/az/st/en.html) at least 15 days prior to the meetings.

Quartzsite Solar Energy LLC, a wholly owned subsidiary of Solar Reserve LLC, has submitted an application to the BLM requesting a right-of-way to construct, maintain and operate an electrical generating facility with a capacity of up to 100 megawatts, using concentrated solar thermal tower technology. An array of mirrors would focus light on receivers at the top of a 653-foot tower. The focused energy would be used to heat salt to a molten state, which would in turn heat steam to power a turbine. The project would require approximately 1,450 acres of BLM-managed land. The proposed site is about 10 miles north of Quartzsite and about 1 mile east of State Route 95.

Western Area Power Administration, a Federal agency, is also requesting a right-of-way for their connected action to the project for a 230-kilovolt collector transmission line, substation, and other related facilities.

The proposed project may require an amendment to the Yuma Resource Management Plan (RMP) because the area is designated as a Visual Resource Management Class III area. The objective of Class III designation is to partially retain the existing character of the landscape. The level of change to the characteristic landscape should be moderate, under that classification.

A visual contrast rating analysis determined a potential strong contrast to the landscape because of the proposed size of the project, the receivers’ glow, and the proximity to State Route 95. Under those conditions, the project would not be in compliance with the Yuma RMP. Thus an amended RMP may be required before right-of-way approval could be given for the project.

The Notice of Intent, initiates the public participation and scoping processes for the National Environmental Policy Act (NEPA) process. A public scoping period of at least 30 days and at least two public meetings will be announced through the local news media, newspapers, and BLM’s Web site (http://www.blm.gov/az/st/en.html) at least 15 days prior to the meeting.

During the public scoping period, the BLM is soliciting public comment on issues, concerns, and opportunities that should be considered in the analysis. Comments about the proposed action should focus on the potential environmental impacts, visual resource management, reasonable alternatives, and measures to avoid or lessen environmental impacts. In order to be included in the Draft NEPA document, all comments must be received prior to the close of the scoping period. Additional opportunities for public participation and formal comment will occur when the Draft NEPA document is issued. Comments may be submitted by either of the following methods:

Electronic Mail: Include your name, any organization you represent, and return address in the email message to: Quartzsite_solar@blm.gov

The BLM manages more land - over 245 million acres - than any other Federal agency. This land, known as the National System of Public Lands, is primarily located in 12 Western states, including Alaska. The Bureau, with a budget of about $1 billion, also administers 700 million acres of sub-surface mineral estate throughout the nation. The BLM's multiple-use mission is to sustain the health and productivity of the public lands for the use and enjoyment of present and future generations. The Bureau accomplishes this by managing such activities as outdoor recreation, livestock grazing, mineral development, and energy production, and by conserving natural, historical, cultural, and other resources on public lands.
Posted by Quartzsite at 5:33 PM