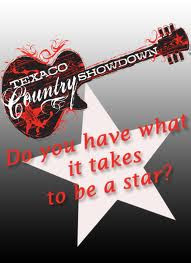 
The Annual Texaco Country Showdown, is the largest Country Music Talent show in the nation. Competition begins in early spring with over 450 local talent contests throughout the United States. Winners then compete at the state level and then advance to one of the five regional levels of competition throughout the summer and fall. Five finalists compete at the National Finals, held in January at the Historic Ryman Auditorium in Nashville for a Grand Prize of $100,000. The National Final’s competition is aired on nationwide television.

Solo singers, duets and bands can compete in this Nationwide Competion. For applications please contact Barbara Martin @ 760-218-5677 or email bmartin@theholtgroup.net.

Be sure and check out http://www.countryshowdown.com/ for a list of other local winners and past winners of the Texaco Country Showdown.

Posted by Quartzsite at 8:42 PM