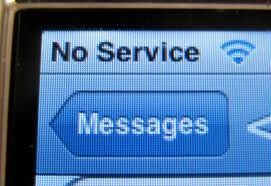 It happens every year! The influx of thousands of Snowbirds overload the AT&T tower in Quartzsite, Arizona. However, AT&T recently received approval to install a new cell tower in town.

AT&T Customer Service Rep said, "It appears a tower is severely degraded. They are aware of the problem and issued a 'ticket' for a tech to come out."

I then asked to be transferred to a technician and Amber was awesome! After explaining the situation in Quartzsite with the huge influx of people, she suggested I spread the word about a new APP called, "Mark the Spot". AT&T's Mark the Spot is an application that provides customers a means to provide feedback on their network experience directly to AT&T. AT&T Customers can download the app and then let ATT know of technical issues right from their phone.

Customers should call ATT from another phone to report the outage: 800-947-5096. It was  suggested the more folks who report the outages, the faster AT&T might get around to installing the new tower planned at 4-corners (corner of Hwy. 95 and Main Street).

Mark the Spot is available for IPhone and Android

Another issue: Amber reminded me that smart phones owners need to completely turn their phones off 2-3 times a week, as AT&T sends updates and phones need to "reboot" in order to accept the updates.

Amber said service is expected to be restored in Quartzsite around 10:30am Saturday, however, "please give us two or three days just in case..." Customers can call AT&T and ask for a credit on their bill for the inconvenience.

I'm sure glad I picked up a new phone from Verizon, and their service is fine in Quartzsite tonight!

I had not planned on changing numbers in January, but here we are! (the former phone will also work, once service is restored to Quartzsite!)

Posted by Quartzsite at 8:21 PM