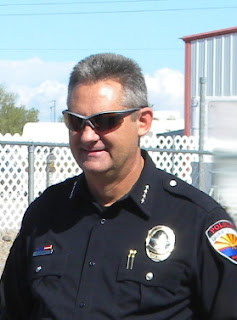 The council adjourned into executive session to consider possible assignments and terms of employment contract with Jeff Gilbert as Police Chief, terms of employment contract with Alexandra Taft as Town Manager, and consultations with special counsel regarding the Town's position regarding litigation in the matter of Ed Foster vs. the Town. Foster received the most votes in the May 15th mayoral election, but has not been seated. Council declared Foster unqualified in June, as he owes the town money. Foster goes to court on Oct. 4th, asking La Paz Superior Court to seat him as mayor.

The executive session was scheduled to last until 12:30pm. Council returned at 1:30pm to finish the rest of the agenda items. First on the agenda was Interim Town Manager Laura Bruno's report. She announced, "the Risk Pool, our insurance carrier, will be keeping us on.... We are going to be, just like our kids, under severe restrictions," and they will be invited to make a presentation to council in the near future.

Bruno also announced the League of Cities and Towns will be attending a Council Workshop scheduled for October 3rd, regarding open meeting laws and agenda modifications.

Bruno announced the voter fraud investigation summary report is online and the full report is available in the library. Bruno reported on the history of the investigation, beginning with the council meeting of March 27, 2012 when council passed resolution 12-07 directing Town Manager Alex Taft to request a formal investigation on voter irregularities specifically from Dept. of Justice, Arizona Secretary of State and the AZ Attorney General's Office; to ask La Paz County Elections Dept. to sequester the March 13th ballots until the end of the investigation or the decline of an investigation.

QUARTZSITE POLICE CHIEF JEFF GILBERT:
Bruno gave a synopsis of the claims and findings of many reports and investigations on Quartzsite Police Chief Jeff Gilbert over the past few years.

- July 3, 2010 Arizona Dept. of Public Safety (DPS) investigated a complaint initiated by then Mayor Ed Foster regarding allegations of theft and misuse of grant funds. FINDINGS: Investigation did not discover any criminal violations committed.

- July 7, 2011 Jackson Lewis firm. An anonymous letter reporting to represent police department employees make several allegations of misuse of sick and vacation time against the Chief of Police. FINDINGS: No credible evidence of inconsistency in sick leave issues, improper denial of reasonable accommodations, nor evidence of community members being targeted. "Some witnesses lied and many claims were stale."

- Dec. 7, 2011 DPS report turned over to AZ Attorney General Office which issued their answer on July 11, 2012. Request by Ed Foster on June 11th, to look into allegations of tampering with a public document, influencing a witness, tampering with a witness, and unauthorized access to criminal history. FINDINGS: Turned down by AZ Attorney General's office for the following reasons: no reasonable likelihood of conviction, witness credibility problems, inadequate evidence of corroboration, inadequate evidence of intent. Detective agreed there was insufficient evidence to prove crimes beyond a reasonable doubt.

- Sept. 18, 2012 Grievance filed by a police officer to Taft and Johnson. FINDINGS: Independent and separate reviews were conducted by the Interim Town Manager, Acting Police Chief, and Parker Police Chief. The allegations were found to be untruthful.

- Sept. 11, 2012 Notice of Termination by Johnson. In working with the attorney, there was found to be no merit to allegations. FINDINGS: The allegation of not reporting while under house arrest are minor and does not justify termination. Allegations about participating in communications training, is a potential offense and if it occurred, needs to be handled through the normal employee evaluation process, and is not a terminable offense. Allegation of tampering with a witness actually occurred a year earlier than Johnson referred to, and was addressed in the DPS report of Dec. 7th, 2011 and by the AG's turn down of July 2012. Allegations of communication with the press is not a terminable offense. Allegations of willful misconduct and criminal misuse of ACJIS system was addressed by DPS report of Dec. 7th, 2011 and the AG's turn down of July 11th, 2012.

Council Member Mark Orgeron explained the details of Gilbert's reinstatement effective today. Gilbert is to avoid politics of the town, to direct efforts of the efficient operations of the police department, to work to promote a pleasant and supportive environment for both officers and the community. Gilbert's contract will be reviewed in February 2013.

In other business, Quartzsite Town Council appointed Patricia Anderson as Chair, and Mike Jewitt as Vice Chair. Workman voted nay, questioning if the action was legal, stating state law says the mayor should be the Chief Executive Officer, and Foster's court date is not until October 4th. Bruno stated this is a town policy which states the council "shall, not may". Jennifer Jones spoke to the council stating the council adjourned the item until after Foster's hearing date. Jones said, "I can absolutely guarantee you, that if you usurp the state regulations and statute on the mayor being the CEO, then you are going to be sued! Not only are you going to be sued, but you're going to be sued personally, because you've now waived executive protection. So, have at it; have fun! It's on you!"

Council also approved an Intergovernmental agreement for Library support services between Arizona Western College and the Quartzsite Public Library. Council approved for the Quartzsite Library to participate with the Southwest Valley Library Consortium and approved the Liquor License for the Quartzsite Women's Club Wine/Beer and Cheese Tasting Event on Nov. 10th, 2012.
Posted by Quartzsite at 9:27 PM