Wenden, Arizona- Thursday, July 26th, the McMullen Valley Chamber of Commerce held a Meet the Candidates Forum. The room was packed with La Paz County voters and candidates, along with Arizona state candidates, and U.S. candidates.


The three hour event was well organized by the large group of volunteers. Attendees had the opportunity to visit with candidates beforehand, and to submit written questions for each of the 19 candidates. Each candidate was given five minutes to speak before questions were asked. Republican candidates dominated the evening with a sprinkle of independents and democrats. 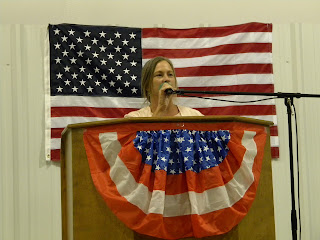 Jones answered a question regarding the controversy around her residency, by stating she does live in La Posa North area of BLM's LTVA (Long Term Visitor Area), located just south of Quartzsite and I-10 (District 3). Jones shared how she loves the peace and quiet of the desert. She said people can buy a seasonal winter pass and also a summer pass, of which she has.

However, according to BLM's website, La Posa LTVA summer fees are:
"From April 16th through September 14th, the fee is $10 per vehicle for day-use, $15 per vehicle for overnight use, or $75 annually per vehicle, for up to 5 people per vehicle. There will be a $1 per person fee charged over the 5 person limit. The maximum stay is 14 days in a 28-day period."Between April 16 and September 14, you may stay in an LTVA only 14 days in any 28-day period." Rule 34 states "After your 14th day of occupation at an LTVA, you must move outside of a 25-mile radius of that LTVA."
http://www.blm.gov/az/st/en/prog/recreation/camping/LTVA/laposa.html

Jones said she can prove that she lives in District 3 because "another news publication" (I'm assuming that would be me, the publisher of Desert Messenger) knows where she lives and "came all the way out to my campsite and took pictures...". Jones may be referring to when I took photographs of her camp on federal lands flying an upside down American flag (as a candidate for Quartzsite Town Council). That photo was taken in December, 2011 (over 7 months ago) and the article was published in Desert Messenger's January 4th issue. See article on Page 7 at  http://www.epageflip.net/i/51737

It is well known by locals that Jones is currently living and working on the North side of I-10 (District 2) on Richard Oldham's property near the old airstrip. Many dog owners have taken their pets there to be groomed. In an effort to clarify this issue, I drove out Saturday afternoon, July 28th, to La Posa North (District 3), near the same location photos were taken back in December. No camp was seen anywhere in La Posa North. Not a trailer, nor motor home, nor even a tent; just a few quail roaming the desert.
Jones' final comment Thursday evening was,
"being educated makes you more of a better decision maker."

Posted by Quartzsite at 6:15 PM