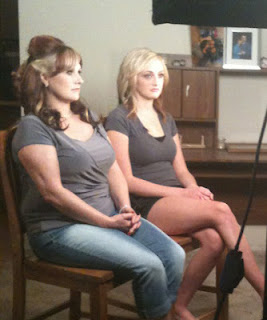 The crew, from LA and Phoenix, came to interview 16 year-old Myranda Garber, who’s cell phone camera caught Scholars’ Academy Principal Steve McClenning and Business Manager making out during school hours. After the video was posted online,  news agencies around the world picked up on the story. Garber and her mother, Tanda Bastin shared their concerns of the future of the Scholars’ Academy.

The show will air Tuesday, May 1st. In Phoenix you can watch it on AZFamily 3TV at 4pm.

Photo by: Starr BearCat
used with permission of Inside Edition.
Posted by Quartzsite at 6:37 AM