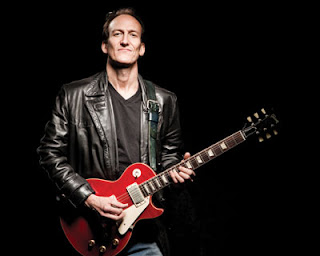 BLYTHE - Fran Banish, the headliner for the 1st Blythe River Blues Festival to be held at Quechan Marina on May 26, Memorial Day weekend, learned his trade as a teenager with a fake ID, hanging out in the blues clubs of Chicago. Banish was a Beatles fan getting into rock and roll when he started reading about the world famous Chicago blues scene.

"I was 10 or 12 when I realized it was happening just 10 miles away from where I lived," said Banish, describing his roots. "I started becoming a blues freak, listening to blues and collecting records. I would demand my dad to take me to see Muddy Waters when I was about 12... and he did."

Evading club security, Banish was exposed to some of the great blues and jazz legends of the time, sitting in with the likes of Lefty Dizz and James Cotton's band when they did weeknight gigs without James Cotton.

Twenty years ago Banish was a member of a Chicago rock band that figured it would have more success by moving to Los Angeles. Unfortunately, the band went bust.

"It was the wrong time for us to move to L.A.," he said. "The Grunge scene was getting huge and we were not playing Grunge so it was back to the blues."

Banish stayed in LA and since then has enjoyed a lot of success as a performer, teacher, and in the studio, where in addition to recording his own material, he co-wrote a pair of songs and played lead guitar on Duncan Sheik's 1996 self-titled CD on Atlantic Records.

"It was his first record and it went Gold," said Banish, who co-wrote the songs Serena and Little Hands on the CD.

Recently Banish has finished a five-song EP, Chicago To LA, a blues sampler, playing some classic tunes as well as an original. The music ranges from modern Chicago blues to some old time country blues as well as funk blues. You can hear it on the music page at www.franbanish.com

The band began promoting the CD at a performance in Cottonwood, Ariz.

"We had the opportunity to see and hear Fran Banish in Cottonwood a few weeks ago and believe it, he is definitely worth the price of admission," said Jim Crawford of the Phoenix, Ariz.-based Phoenix Blues Society. "The guy flat makes his Strat smoke."

Banish is bringing his band with him to the Blythe River Blues Festival.

"It's a beautiful thing," he said about being the main act. "I've got a great band with me, so it's going to be terrific and fun."

The band includes Paul Allen, a drummer who, while just a teenager, played with Bo Diddley. Allen recently came off a tour with pop diva Kelly Clarkson.

Dale Jennings, from Detroit, is on bass and he's played the Ann Arbor Blues Festival with Hubert Sumlin, Howling Wolf's guitar player, as well as gigging with Lazy Lester and Rufus Thomas.

On keyboards will be Sasha Smith, a Northern Californian who, at age 11, played for and hung out with Johnnie Johnson, Chuck Berry's former pianist.

Banish promised festival attendees were going to get a high energy, Chicago blues band covering a spectrum of blues ranging from funky and rocking to old time.

"There will be some rock and roll flavor as well as some New Orleans flavor, too," Banish said. "It's what we're doing - Chicago blues influenced by New Orleans, so there is some funk and rock influence to it. I worked in rock and roll but I always come back to the blues. I'm psyched to have this band with me. Everyone is a bit of a prodigy and an MVP in their own right."

The first ever Blythe River Blues Festival is scheduled for May 26 and will benefit the Blythe Area Chamber of Commerce. Other bands scheduled include Bernie Pearl, 7th Sons, the South Main Street Blues Band and Paul Winer.

The festival will be held from 2 p.m. until midnight at the Quechan Marina on the Colorado River in Blythe.

Tickets are $15 and available through the Blythe Area Chamber of Commerce (760-922-8166) or online at blytheriverblues.com. You can also watch the show from your own boat for just $25 and the price of ticket for everyone in the boat.

Local hotels will offer discounts to customers who mention the Blythe River Blues Festival when booking a room. A list of hotels and resorts is provided at the blytheriverblues.com. There will also be RV parking at the nearby Colorado River Fairgrounds for $10 a night.

Palo Verde Valley Transit Agency will provide bus service from a fixed route that will be published at a later time. They will also provide home/hotel pickup service to the park and back for a cost of $5 each way. Call 760-922-4900 for more information on bus service.

Posted by Quartzsite at 3:36 PM