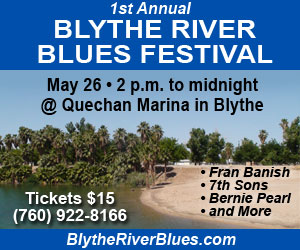 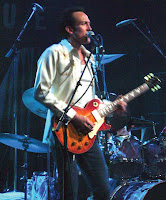 This first blues festival has to be authentic,” Farrage said. “We only want the best talent possible.”The festival will be held at the Quechan Marina on the soothing cool Colorado River in Blythe, Calif. Tickets are $15 and available through the Blythe Area Chamber of Commerce (760-922-8166) or online atblytheriverblues.com.
Bernie Pearl is a blues guitarist from Los Angeles, who learned the art from some of the greatest blues legends to come out of the Mississippi Delta. His band has backed B.B. King and Stevie Ray Vaughn, to name a few. His latest CD, Sittin on the Right side of the Blues, is a tribute to his working with the late great Lightnin Hopkins for over a decade). Bernie is a true connection to America’s great blues history.McFadden grew up in Blythe before moving to Los Angeles and finding success as a drummer. The 7th Sons were conceived in late 2010 and have appeared with Savoy Brown, Johnny Winter and others.
Fran Banish got his first guitar at age 6 and began to perform professionally at 14. He jammed with many Chicago Blues masters while studying classical guitar at Northwestern University. He recently recorded an all blues CD with former Buddy Guy band members and considered one of the best blues guitarist around...

Quechan Marina can be reached from Interstate 10. If you’re traveling west, get off at the Riviera Drive off ramp and turn left. Follow the road under the freeway and Quechan will be on the right. If you’re traveling east, get off at the Riviera Drive off ramp, which is located at the Agricultural Checkpoint you have to stop at when entering California.
The weather on the river and on the beaches can get quite hot, so dress appropriately. “The weather may be hot but the bands will be even hotter,” said festival coordinator Mike Evans. “Come out to the river, take a swim and listen to some really great blues music. It’s Memorial Day weekend and everyone’s on the river. Don’t be left out.”

Posted by Quartzsite at 9:55 PM