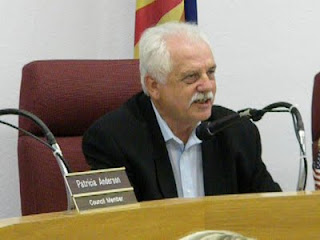 Quartzsite, AZ- Tuesday, May 10, 2011, just prior to the regular meeting of the Quartzsite Town Council, Mayor Ed Foster was arrested, cited and released on 3 charges pertaining to a May 5th incident involving the arrest of Jennifer “Jade” Harris-Jones.

According to Quartzsite Police Dept (QPD) reports, on May 5th, Foster arrived on the scene of a “high profile drug investigation” taking place near the QPD's holding cell, in the employee parking lot located behind Town Hall. Jennifer “Jade” Harris-Jones was already on the scene locked inside her vehicle, refusing to obey police orders. Foster was “warned several times” by Quartzsite Police Chief Jeff Gilbert not to interfere. “He became threatening by yelling that he was my [Gilbert’s] ‘boss’ and the ‘Mayor’ and that he was demanding an explanation.”

As Jones was being arrested, she evidently threw her keys towards Foster, who according to the report, “ran and stepped on the keys in an attempt to keep me [Gilbert] from getting them. [Gilbert] then had to physically pry his foot off of them to retrieve them.” According to Gilbert, Foster drove off before being sited at the scene.

After the arrest on Tuesday evening, Foster proceeded to lead the Town Council meeting that night. For the video, visit www.YouTube.com/user/qwatchingeyes.

A hearing has been set for June 8th, however Foster has requested a change of venue.
Posted by Quartzsite at 9:48 AM