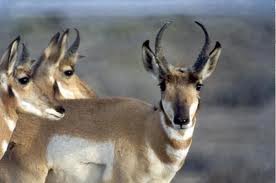 Preparation of Release Site at Kofa National Wildlife Refuge
to Proceed
The U.S. Fish and Wildlife Service (Service) announced today the final rule to establish two non-essential experimental populations of the endangered Sonoran pronghorn under section 10(j) of the Endangered Species Act (ESA). This final rule will set in motion the reintroduction of Sonoran pronghorns to establish up to two new populations as envisioned by the recovery plan.

“Establishing two new Sonoran pronghorn populations will advance recovery for one of North America’s most imperiled land mammals,” said Benjamin Tuggle, Regional Director of the Service’s Southwest Region. “Only nine years ago, drought nearly extirpated this species in the U.S., but through the continued, far-sighted efforts of conservation biologists, numerous federal land managers, the U.S. Air Force, Native American Tribes and the Arizona Game and Fish Department, the pronghorn will now be returning to a portion of their historical habitat in the U.S.”

The Sonoran pronghorn has been protected under the ESA since 1967. The ESA provides a critical safety net for America’s native fish, wildlife and plants. This landmark conservation law has prevented the extinction of hundreds of imperiled species across the nation and promoted the recovery of many others.

The final rule designating an experimental population will publish in the Federal Register on May 4, 2011, and become effective on June 6, 2011, designating any reestablished Sonoran pronghorn populations as an “experimental, nonessential population” – a designation under the ESA allowing for greater management flexibility in reintroducing new populations within the species’ historical range. The Service has completed an environmental assessment and selected the Kofa site, historically occupied by the species, as a preferred location for reestablishing a new population to expand its range and bolster pronghorn numbers. The Luke Air Force Base commander will sign on as a cooperator in the project and final environmental assessment.

Measures to create a pronghorn breeding enclosure on the Kofa refuge will be conducted by Refuge staff and contractors with the Arizona Game and Fish Department. A core population of 11 breeding-age pronghorn will be moved to the enclosure next winter. By late 2013, up to 20 two-year old offspring are expected to be released from the facility into suitable adjacent habitat.

In the future, a new population will be established on BMGR-East, located east of State Route 85. Offspring reared at nearby Cabeza Prieta National Wildlife Refuge captive-breeding facility will be initially moved to a holding pen to be constructed on BMGR-East for acclimation of the animals prior to release on the site.

The Service does not expect that this action will impede border security efforts in any way and is committed to coordinating closely with U.S. Customs and Border Protection and other partners before implementing release of Sonoran pronghorns into BMGR-East.

Sonoran pronghorn originally ranged widely throughout the Sonoran Desert in southwestern Arizona and northern Mexico. The Sonoran pronghorn is extremely skittish and extremely fast. Because it uses distance and speed as protection from predators, it prefers wide open spaces.

“I am very proud of the work our agency has conducted on this species over the last 20 years. We nearly lost our herd of Sonoran pronghorn in 2002 when fewer than 20 animals remained. Fortunately, we were given a second chance at recovery, and active, aggressive, hands-on management brought this species back from the knife’s edge of extirpation,” said Larry Voyles, Director of the Arizona Game and Fish Department. “This project provides a good model for cooperation between state and federal wildlife agencies and the Department of Defense, who brought together the resources and expertise necessary to pull off a truly important accomplishment.”

Sonoran pronghorn are now confined to an increasingly isolated and fragmented portion of their former range as a result of human settlement and associated development. Today, there are an estimated 102 animals in the U.S. limited to Barry M. Goldwater Range, Cabeza Prieta National Wildlife Refuge, Organ Pipe Cactus National Monument, Bureau of Land Management lands, and two Mexican populations totaling about 470 animals.

The full descriptions of the release plans and locations, environmental assessment, Finding of No Significant Impact (NEPA) and experimental population rule are available at http://www.fws.gov/southwest/es/Library/ or http://www.fws.gov/southwest/es/arizona/Sonoran_Pronghorn.htm or by contacting the Refuge Manager, Cabeza Prieta National Wildlife Refuge, 1611 N. Second Ave., Ajo, AZ 85321 (520-387-6483).

America’s fish, wildlife and plant resources belong to all of us, and ensuring the health of imperiled species is a shared responsibility. To learn more about the Service’s Endangered Species program, go to http://www.fws.gov/endangered/.

Established in 1939, Kofa National Wildlife Refuge near Yuma encompasses 665,400 acres of pristine desert. The Refuge provides essential habitat for Desert Bighorn Sheep, the California Fan Palm, and other wildlife and plants. This will be the first population of Sonoran pronghorn on the Refuge.

The mission of the U.S. Fish and Wildlife Service is working with others to conserve, protect and enhance fish, wildlife, plants and their habitats for the continuing benefit of the American people. We are both a leader and trusted partner in fish and wildlife conservation, known for our scientific excellence, stewardship of lands and natural resources, dedicated professionals and commitment to public service. For more information on our work and the people who make it happen, visit www.fws.gov.
Posted by Quartzsite at 4:50 PM