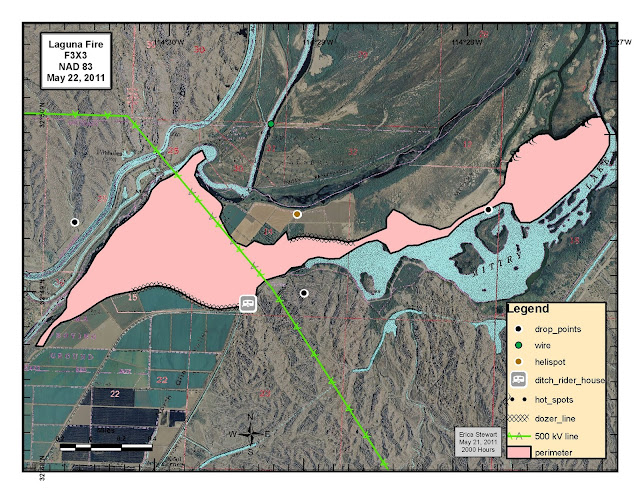 (Yuma, Az.)—The Incident Commander of the Laguna Fire tonight advises that
the target for full containment of the 751-acre blaze is now more likely to
occur on Tuesday, May 24, 2011 than on Monday.

Firefighters are working now inside the fire’s perimeter where several
hotspots of smoldering or creeping flames burn close to pockets of unburned
vegetation. Sunday’s higher winds and unburned vegetation fueled
interior flames. “While it looks like the fire it out, it is deceiving.

There are many pockets of heat below the ground and unburned vegetation
that could start a flare-up. This is the time when it takes slow and
methodical work to cool down the interior and ensure that fire doesn’t jump
our containment line,” says James Stewart, a Type 3T incident commander .

Yuma County Sheriff Deputies were on scene Sunday turning spectators away.
The Avenue 7E Road remains closed as emergency personnel are working
through the Laguna Dam and Mittry Lake recreation area. A helicopter is
fighting the fire by dipping a huge bucket into the waters and dropping
water from the air on the interior fire where, on Sunday, plumes of thick
black smoke rose above the Yuma skies.

Fire investigators continue the investigation as human caused. Information
leading to a conviction is worth up to a $10,000 reward. Call
1-800-47-ARSON or go to www.wetip.com

To date there have not been any injuries to firefighters, though an
individual was taken to the hospital today for evaluation after hiking
soreness and was returned to full duty. Crews were assigned Sunday to hike
to remote locations where they aggressively reinforced the fireline.
Bulldozers improved containment lines that to date have kept the footprint
at 751 acres for several days.

The Laguna Fire began Wednesday, May 18, on the California side of the
Colorado River; it jumped to Arizona and tracked north along the popular
recreation sites at Laguna Dam and Mittry Lake. Several historical sites
were damaged or destroyed and wildlife habitat was burned.

Suppressing the Laguna Fire has been a major interagency cooperative effort
with crews remaining on scene from the Bureau of Indian Affairs, Fish &
Wildlife Service, the Bureau of Land Management and Az. State Forestry.
Early cost estimates are now at $300,000.

Campers are reminded that Fire Restrictions are in place that prohibit
campfires, smoking, and target shooting on public lands in southern
Arizona. The restrictions will continue until conditions warrant
rescinding.