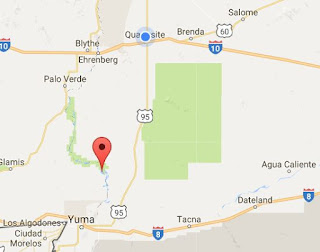 LOCATION: The fire is located on the Imperial National Wildlife Refuge on the California side of the river between Ferguson Lake and the old gauging station across from the Eureka Mine area.

ACRES BURNED: The total perimeter of the fire is currently under 100 acres.

WEATHER: High temperature today is expected to be between 101 and 105 degrees with humidity between 26 to 31%. Winds are from the South at about 8 to 17 mph and are expected to calm this evening and remain from the south. Winds could become gusty in the afternoon if thunderstorms form.

RESOURCES AND STRUCTURES THREATENED: There are no structures threatened. Fire engines have been placed at strategic locations on the Arizona side of the river in case of any spot fires in locations reachable by road.

CONTAINMENT: Currently at 5% CAUSE: This fire was caused by lightning.

CURRENT STATUS: The Imperial Fire is slowly burning downstream on the California side of the Colorado River and is only accessible by boat. The western side of the fire is desert upland habitat.
Firefighters conducted a burnout operation and stopped the fire’s upriver movement on Saturday. There was one small spot fire on the Arizona side of the river Saturday that was extinguished. Smoke and flame will continue as vegetation continues to burn toward the south. Fire boats are on the river.
A fire line has been prepared at a narrow area near Ferguson Lake.

The Meers Point Recreation Area is closed to public use to accommodate firefighting equipment. The river remains open but river users are asked to use extreme caution in the area.

Firefighter and public safety continues to be the top priority.
Posted by Quartzsite at 8:13 PM