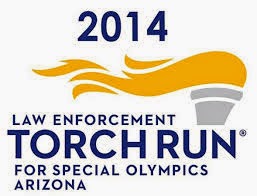 Officers from the QPD, along with the Arizona Department of Public Safety, and other Public Safety agencies will be running and carrying the torch on Highway 95/Central Avenue from the Quartzsite water treatment facility north of Quartzsite. The Torch will be carried through Quartzsite on Central Avenue to Main Street then to Riggles Road. The Torch will be escorted to the next leg where it will be handed off to Maricopa County Sheriff’s Office.  On May 2nd, the Torch will reach downtown Phoenix at the Capital, where a special ceremony will take place.

The event is estimated to take place from 7 a.m. to 9 a.m. From this day forward donations will be accepted along with Torch Run T-Shirts will be sold for Special Olympics Arizona. For more information, call Officer Hilario Tanakeyowma at 928-927-4644. To learn more about Special Olympics Arizona or to make a donation online, go to www.SpecialOlympics.com

Posted by Quartzsite at 8:47 AM