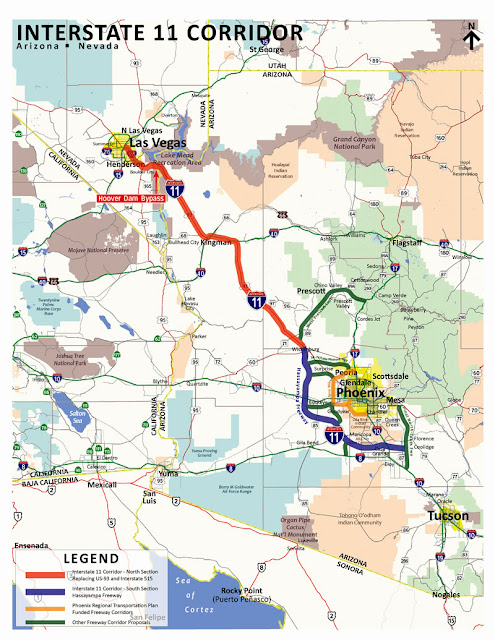 While an exact alignment for I-11 will be determined through extensive future engineering and environmental studies, work began this summer to examine a connection between Phoenix and Las Vegas, with the potential to extend north towards Canada and south to the Mexico border, creating a new corridor through the Intermountain West. Such a corridor would provide a new connection for communities, major trade hubs, existing and future domestic and international deep-water ports, as well as intersecting transcontinental roadways and railroad corridors. The I-11 corridor could also be paired with rail and other infrastructure components, such as energy and telecommunications, to meet the region's needs.

This public meeting will provide the public with an opportunity to provide formal comments about the concept at these early stages of study. More information is also available at www.i11study.com.

I-11 has been a cornerstone of the Governor’s jobs and economic development agenda that examines current and future transportation and trade infrastructure needs to improve Arizona’s competitiveness in a global marketplace.

Currently, ADOT and the Nevada Department of Transportation are engaged in a $2.5 million study of the I-11 and Intermountain West corridor. This two-year study is a high-level overview of the potential interstate corridor and will be the foundation for subsequent environmental studies that may be required to develop the corridor.

Phoenix and Las Vegas remain the largest cities in the nation not linked by an interstate highway corridor. The combined population of Phoenix, Tucson, Las Vegas and Reno was less than 700,000 when the Federal Aid Highway Act of 1956 was enacted. Today, the combined population of these cities is 8 million and is expected to grow even further, prompting the need for better surface transportation connections to accommodate not only the travel demand between these metropolitan areas, but also improved mobility for freight shipments throughout the Intermountain West and inland portions of the West Coast.

Funding to construct a potential I-11 corridor has not been identified.
Posted by Quartzsite at 5:56 PM