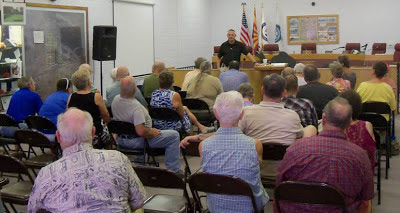 Gilbert told the crowd that the matter has been handed over to the Town Attorneys. Gilbert stressed that the residents in the unincorporated communities just outside of Quartzsite, namely La Paz Valley and Rainbow Acres, would still be protected by law enforcement officers.

"If we are needed, we will be there for you!" Gilbert stressed. "It's about protecting the public first," he said. Gilbert explained, that many times, QPD officers are the first on the scene, even if it's located outside of Town Limits. With such a large county to cover, often La Paz County Sheriff Deputies are not available in the area, and QPD is called out.

County Attorney dissolved the county Task Force, known as C.A.D.R.E. on June 13th. Police Departments of Quartzsite and Parker were members of the Task Force prior to Drum taking office in January. Since then, Drum and the two Police Chiefs have been at odds in public, sending multiple press releases to local media. Drum made it clear he wants to form his own Task Force, but with recent events, it's unclear whether the only two incorporated Towns in the county will join.

Chief Gilbert also announced QPD's new "No Drugs…No Thugs…No Crime" Campaign aimed at the prevention and the apprehension of illegal drug and criminal activity in the Town of Quartzsite.

Gilbert said, "The recent events that have resulted in the dissolution of the joint drug task force by La Paz County officials has led the Quartzsite Police Department to take a different approach in its fight against illegal drug and criminal activity."

The police department has already implemented efforts that have led to the arrest of five individuals for felony drug offenses and one individual for misdemeanor drug offences in the past few weeks.  Illegal drug activity is often the catalyst to other victim crimes such as burglary, theft and assaults.

The Quartzsite Police Department will continue to work with all Local, State and Federal agencies to further drug investigations and to deter criminal activity driven by such crimes.  “We will take an aggressive approach to enforcement and prevention through enhanced efforts by the members of this department.”

Recently, the Quartzsite Police Department was assisted by the Parker Police Department in conducting a search warrant after a felony drug arrest.  “Chief Mendoza and I are committed to working together effectively as our criminal activity often crosses boundaries.”

Citizens are encouraged to report illegal drug activity or any information that could lead to the arrest of subjects involved with any type of criminal activity.  Please call the Quartzsite Police Department at (928) 927-4644 or Central Dispatch at (928) 669-2281 and always remember to call 911 if it is an emergency.

Gilbert assured local residents that the Quartzsite Police Department will continue to serve and protect the public.