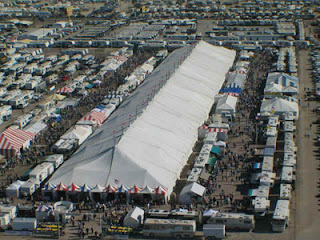 Quartzsite, AZ - It was recently announced that the 17th Annual Quartzsite Hobby, Craft & Gem Show and the 16th Annual Quartzsite Rock & Roll Classic Car Shows, that ran concurrently, have been canceled. Promoter Kenny King stated that after the economic slump in 2008, attendance and participation had been in decline and the decision was made to eliminate the shows as of 2014.

King also said that they are looking for new ideas for an additional new show that may spark more interest in people staying over after the big RV Show closes and would even consider co-promoting or leasing their show facility to another promoter.

It was also stated that the 31st Quartzsite Sports, Vacation & RV Show will go on as planned from January 18th - 26th in 2014 and that the RV Show has continued to draw huge crowds and exhibitor participation.

More information on the 2014 event is available at www.quartzsitervshow.com.

Posted by Quartzsite at 3:13 PM