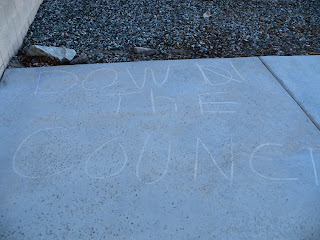 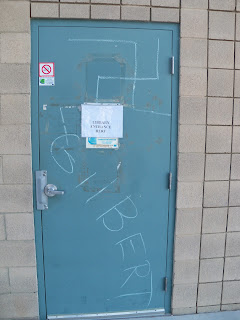 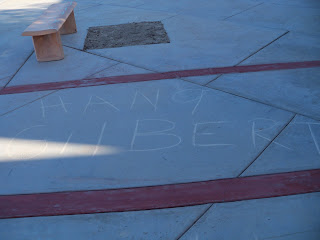 Quartzsite Police Department issued a press release today about the "tagging" or "chalking" incident at Town Hall. The following is information from QPD:

"On Tuesday, September 27, 2011 at approximately 7:30 a.m., employees of the Town of Quarzsite discovered that the Town Hall building had been “tagged” with hate-filled messages sometime during the night.
The tagging was discovered on the steps leading onto the surface of the courtyard entry into Town Hall, on seating benches outside Town Hall and the door to the Town library. Tagging was also discovered along the roadways in other areas of the Town of Quartzsite.
Tagging included messages such as “Death to the Council”, “Hang Gilbert”, “Hang Them All”, and featured the attempted drawing of a “Swastika,” a symbol of Nazi Germany embraced by white supremacy and other hate groups.

Video surveillance recordings at Town Hall showed two persons, Michael A. Roth, age 46, and Dana J. Stadler, age 58, both of Quartzsite, engaged in the tagging. Both individuals were later arrested the same day and each faces twelve counts of criminal damage, one count of criminal trespass, and one count of conspiracy. Both were booked into the La Paz County jail. Both men are reputed to be anti-Quartzsite government “activists” and have been outspoken about their ant-government views in the past.

The Quartzsite Police Department reminds residents that “tagging,” even done with chalk, violates Arizona’s criminal damage statute whether the tagging occurs on public or private property."

According to the website, "Chalk the Police is a nation wide campaign to raise public awareness about policing issues. Folks from all over the country will be heading out to their local police station(s) or parks (anywhere that’s public property) to advocate, in solidarity, police accountability. Activists are encouraged to carry signs, pass out informational fliers and write sidewalk messages to voice their messages of protest. Local and independent Media is encouraged to cover these peaceful events."

The Arizona Revised Statute ARS 13-1602 Section A 5) states:
"Drawing or inscribing a message, slogan, sign or symbol that is made on any public or private building, structure or surface, except the ground, and that is made without permission of the owner."
Depending on the amount of damage to property, Criminal damage is punishable as Misdemeanor Class 1, or 2 or as a Felony Class 4, 5 or 6.
There are thirteen photos from QPD on this incident. I'm just showing some here.
The photo below (the only one out of the 13 not at Town Hall) is on W. Main St.,
directly in front of La Casa del Sol RV Park, where Jennifer Jones works as a dog groomer. 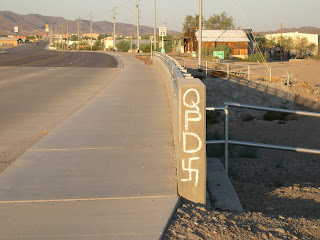 Ruth Castillo, of KSWT in Yuma wrote a story on the incident at:
http://www.kswt.com/story/15574877/quartzsite#.ToSMgBOk0tI.facebook
Posted by Quartzsite at 8:30 PM