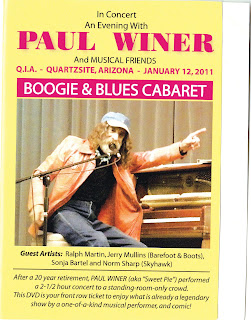 Free Concert in Town Park
Friday, June 10 at 7pm
at the Pavillion

The Arizona Centennial of Quartzsite Committee is sponsoring a FREE concert in the Town Park on Friday, June 10 starting at 7 p.m. The concert will feature local bookstore owner, artist and musician Paul Winer, playing some stompin' boogie-woogie and blues music. He will be accompanied by local musician Ralph Martin on the washtub bass.

Paul held his first concert in Quartzsite this past January at the Quartzsite Improvement Association (QIA). Over 900 people showed up, many of whom had to stand outside to see the show since the hall only holds 760. He now holds the record for the most people at one show in the history of the Q.I.A. His show was 2 1/2 hours of great music, comedy and lots of laughs, with special musical guests Jerry Mullins and Norm and Sonja (Skyhawk) along with Ralph Martin. The Q.I.A. has already booked him for two shows next January, and tickets will be sold in advance for both these shows.

This concert in the park is part of the Arizona Centennial of Quartzsite celebrations, and everyone is invited to come out and enjoy some great music. Paul's DVD of his QIA concert will be available if anyone didn't get to see it in person, or just wants a souvenir of a great evening. Be sure to bring a chair to sit on and come out and have a great time!!
Posted by Quartzsite at 9:06 PM