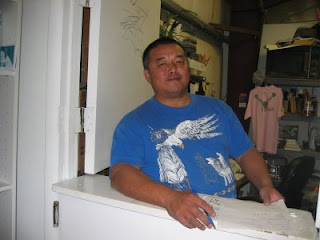 Visitation: 8-10 AM CA Time
at Frye Chapel and Mortuary of Blythe on 7th St.


Age 51 of Qaurtzsite, Az, passed away on December 21, 2008 of asthma attack which resulted in congestive heart failure. He was known to his brothers and sisters as Chengwen, to his wife and son as Carlos, and most fondly to his friends as Chen.

Chengwen was born in Taipei, Taiwan on March 10, 1957 to the late Mr. and Mrs. Bing H. and Hai Mei Chen. He immigrated to the United States in 1970, attended University High School in West Los Angeles, graduated from University of California at Irvine and worked for Hewlett Packard in San Jose, CA. as a Software Engineer for over 20 years. Chengwen met his wife Ana while traveling and learning Spanish in Durango Mexico. They were married in 2001 and gave birth to their son Luis the following year.

Chengwen wanted a small town life style for his family. After two years of extensive search, he found and fell in love with Quartzsite. He bought and operated the Q-Laundromat for the past five years. Chengwen loved Quartzsite for its diversity of people and the laundromat where he could let his creative juices flow. The greatest love of his life was Ana and Luis. His laundromat business gave him the freedom and time to be with them. Chengwen lived his life doing exactly what he wanted.

Chengwen is survived by his wife, son, seven siblings, four nieces, eight nephews, and his friends and customers, who he considered his family.
Posted by Quartzsite at 7:54 PM