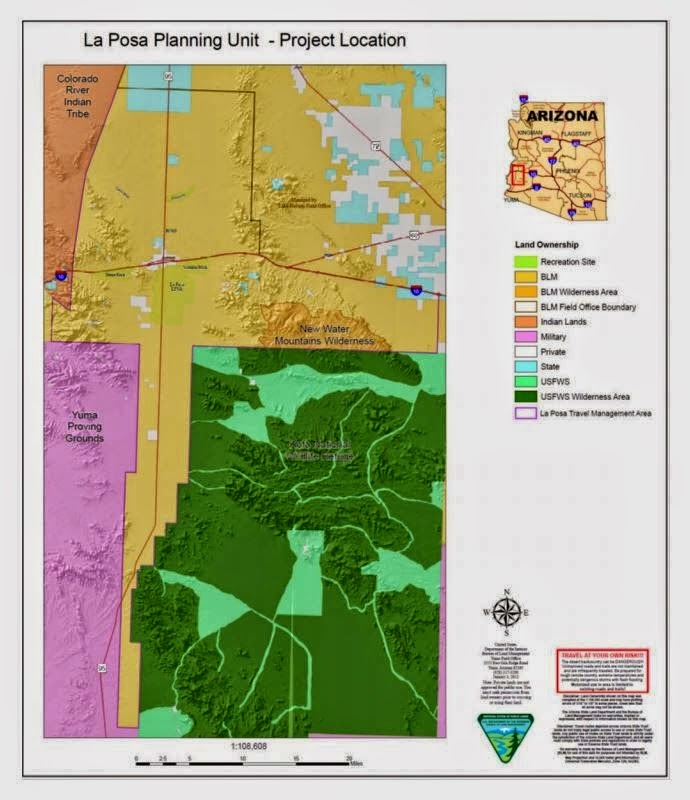 Yuma, Ariz. - The Bureau of Land Management (BLM) Yuma Field Office has announced that the La Posa Travel Management Plan preliminary Environmental Assessment (EA) will be available for review starting Wednesday, January 21, 2015.  There will be a 30-day public comment period and all comments must be received by close of business on February 19, 2015.  Beginning on January 21, 2015, the preliminary EA may be reviewed on the BLM internet website at http://www.blm.gov/az/st/en/prog/travel_mgmt/la_posa.html.

To coincide with the comment period and to update the public on the preliminary EA,
the BLM will hold an open house on Wednesday, January 21, 2015.

The open house will be held at the Quartzsite Community Center
located at 295 Chandler Street; Quartzsite, Arizona; from 3:00 to 6:00 p.m.

Local BLM specialists and managers will be available so that residents and interested parties can ask questions and voice concerns.  Maps will be on display for review, as well as general EA and travel management information.

Written comments about the preliminary EA for the La Posa TMP will be accepted through
February 19, 2015.  Comments postmarked by this date will be considered in making the final decision.  The comments should be specific to be most effective.  Comments should be mailed to BLM Yuma Field Office, Attention:  Ray Castro; 2555 E. Gila Ridge Road; Yuma, Arizona  85365; or through email to blm_az_ym_trails@blm.gov.

The BLM manages more than 245 million acres of public land, the most of any Federal agency. This land, known as the National System of Public Lands, is primarily located in 12 Western states, including Alaska. The BLM also administers 700 million acres of sub-surface mineral estate throughout the nation. The BLM's mission is to manage and conserve the public lands for the use and enjoyment of present and future generations under our mandate of multiple-use and sustained yield. In Fiscal Year 2013, the BLM generated $4.7 billion in receipts from public lands.
Posted by Quartzsite at 11:53 AM