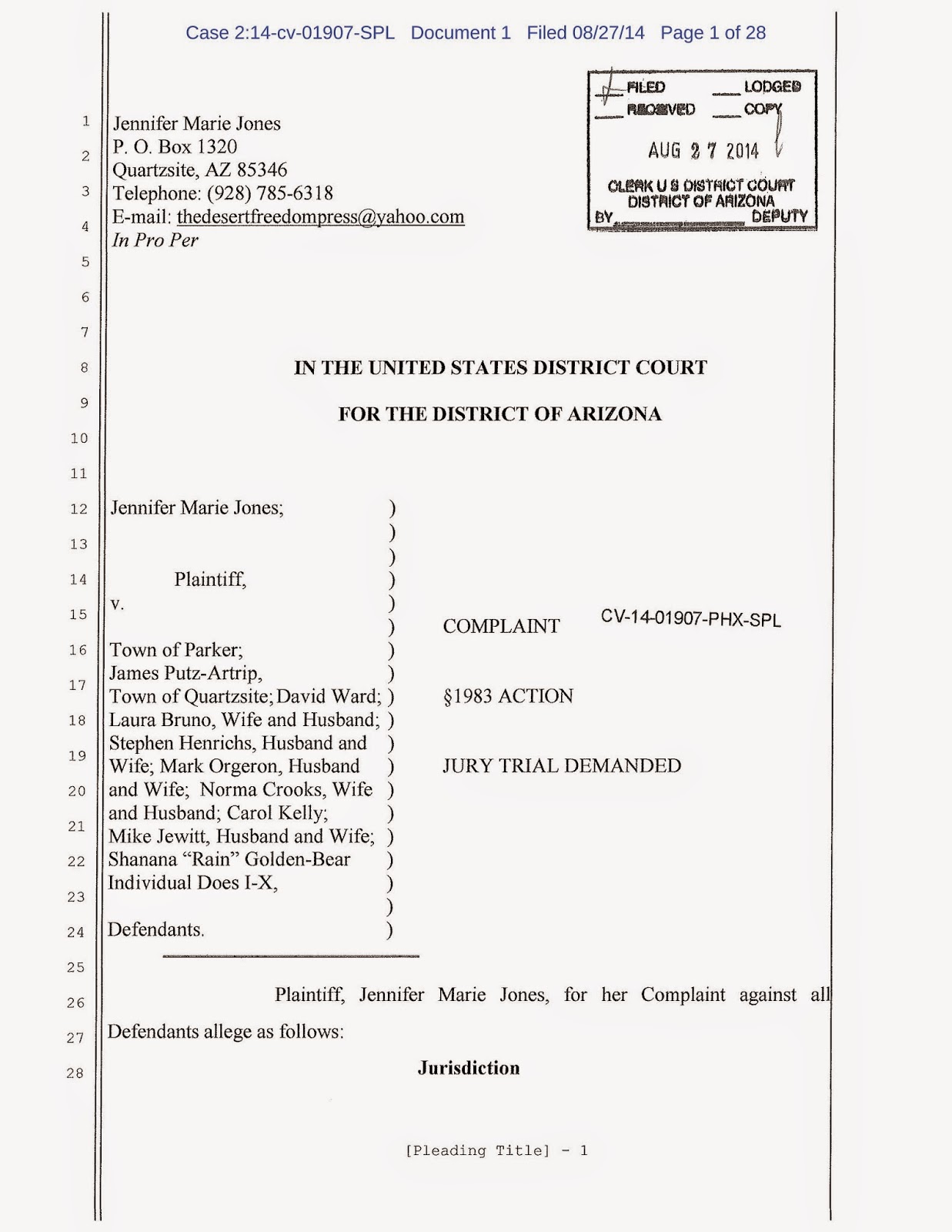 Jones, who represents herself, alleges in the 28-page Complaint CV-14-01907-PNX-SPL, that defendants violated her rights when Quartzsite Police Dept. and Henrichs visited her location at Rice Ranch Swap Meet on August 22, 2013 with a warrant to inspect a 1956 trailer to ensure compliance with Town Codes. According to a press release issued by the Town of Quartzsite they found 15 Pit Bull dogs housed in cages in the trailer. The Town of Quartzsite emailed the press release to the Arizona Republic, Parker Pioneer, Palo Verde Times, and Desert Messenger. It was published on this blog on Aug. 26, 2013. Jones alleges the Press Release was "libelous and defamatory."


Jones publishes The Desert Freedom Press, a free tabloid, and proudly proclaims on the paper's Facebook page, "MY FREE SPEECH IS NOT NEGOTIABLE".

In the past few years, Jones ran failed political campaigns for Quartzsite Town Council, Quartzsite Mayor, La Paz County Supervisor and Arizona State Representative Dist. 5. Jones became famous when the 2011 video of her being removed from a town council meeting went "viral." Jones stated she retired from her dog grooming business in the spring of this year.

In her latest claim, Jones alleges Golden-Bear (along with other defendants):
"Violated the First Amendment Right to Free Speech, Press and Assembly; First Amendment Right to be Free from Retaliation; Fourth Amendment Right to be Free from Unreasonable Search and Malicious Prosecution; Intentional Infliction of Emotional Distress; Conspiracy to Violate the Constitutionally Protected Rights of the Plaintiff; see paragraph 66. Intentional Interference with Contract; Violating of Equal Protection by Singling out Plaintiff for Unequal Treatment for no other Reason Other Than Malice, as a Class of One."

Jones is seeking compensatory and punitive damages, along with "attorney's fees" and also demands a jury trial.

As of today, Desert Messenger has not been able to confirm that any defendant has been legally served a summons in this case. See below for the full document.

On a personal note: There is much more I would love to say about a self-proclaimed Free-Speech-Advocate tabloid publisher filing a federal court claim against me for publishing an Official Press Release issued by the Town of Quartzsite, but I won't... for now!

Posted by Quartzsite at 9:46 PM