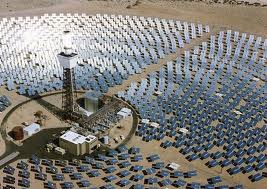 Monday, June 3, 2013 - The U.S. Secretary of the Interior today announced the approval of three major renewable energy projects totaling 520 megawatt capacity.
Combined, the projects will deliver enough clean power to supply the electricity needs of nearly 200,000 homes and will create hundreds of jobs.

The 100-megawatt Quartzsite Solar Project in Arizona project will use concentrating solar thermal technology and will be situated on 1,600 acres of Interior’s Bureau of Land Management administered lands. The facility will generate enough electricity to meet the needs of an estimated 30,000 homes. The solar farm will use dry-cooling technology to minimize water consumption.

The 350-megawatt Midland Solar Project in Nevada is solar panel based and will provide enough electricity to power about 105,000 homes.

In all projects, the Interior’s Bureau of Land Management (BLM) worked closely with stakeholders to minimize potential environmental impacts.

25 utility-scale solar farms, 9 wind farms and 11 geothermal plants have been approved by the Department of the Interior since 2009. When all have been constructed, they will represent a total of  12,500 megawatts of capacity, enough electricity to power more than 4.4 million homes. The Department  surpassed President Obama's goal of authorizing 10,000 MW of renewable energy projects on public lands by the end of 2012.

A further 15 active renewable energy proposals are in the BLM pipeline, which will be reviewed this year and in 2014.

http://www.energymatters.com.au/index.php?main_page=news_article&article_id=3774
Posted by Quartzsite at 3:53 PM