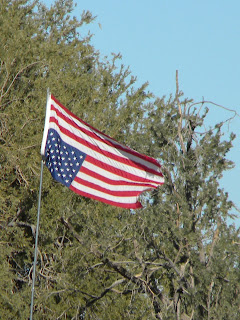 
Jennifer “Jade” Jones, a candidate for Quartzsite town council and self proclaimed Public Persona, along with her husband John “Jack” Jones have been camping at that site in the LTVA since early fall. Mrs. Jones became famous during the summer when the video of her arrest at the June 28th council meeting went “viral” on the Internet.

United States Code Title 4 Chapter 1 §8. Respect for Flag states “The flag should never be displayed with the union down, except as a signal of dire distress in instances of extreme danger to life or property.”


The International Code of Signals 2005 Edition, Appendix 1, contains no reference to an upside down national flag as a possible distress signal. However, a German Merchant Captain once explained , “If a crew abandons a ship in distress to save their life, the last thing to do (if they have time to do so) is to turn the flag upside down. This means that they give up any right on the vessel or cargo and anybody who manages to rescue the ship afterwards could keep it.” In court, a company would lose claim of property on an abandoned ship, but if the flag was upright it would indicate that the crew did not leave in distress, and the company would have a stronger case in court to claim the right on the vessel.


Local veterans and their wives interviewed for this story consider the act of flying the flag upside down to be very disrespectful, but a right of expression that they fought for, and many died for.

Desert Messenger reached out to Mrs. Jones for comment. Her reply was simply, “Don’t you have any real news to report?”

However, Jones, publisher of The Desert Freedom Press, dedicated almost a half page to her editorial, focusing solely on the upside down flag flying at her campsite. She suggests that her 5 "false" arrests in 13 months, coupled with other public comments and events, would lead a reasonable person to conclude her life and property are in "extreme danger in a country whose leaders have chosen to suspend provisions of the very document that defines us as a nation." She encourages "everyone across the country to do so as well".

Snowbirds from Canada, expressed their shock, as they considered Jones' actions to be "disrespect of a nation's flag". One veteran's widow stated, "It's a slap in the face to those who fought for our country."


[Editor’s note: This article was originally slated for the front page of the January 4, 2012 issue. Out of respect for the family of Council Member Bob Kelley, whose death on December 31, 2011 became front page news, the decision was made to move the story to page 7. Kelley was a proud veteran with very strong convictions for the flag and his country.]
Posted by Quartzsite at 6:00 PM