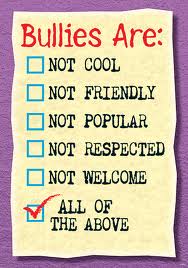 This Town Ain't Big Enough
For the Two of Us, Pahdnah.


by Jedidiah Free
Normally, I write about the peace and beauty of the desert, and the interesting things to do here in Quartzsite. Occasionally I write about the people and businesses that make our town exciting. I typically stay out of politics and the public forum as much as possible, but once in a while a topic arises that I cannot, in good conscience, remain quiet about, like my article last April about the closing of the State Parks here in Arizona. Today happens to be another one of those times.

There is a bully here in Quartzsite. I know about bullies. I grew up in a rough Jewish/Italian inner city neighborhood in Philadelphia, during the 70’s and 80’s when desegregation of schools was taking place. In my neighborhood, when a bully showed up, he didn’t last long. We were tough and not easily intimidated. We stood up for ourselves and each other. Even kids who weren’t friends beforehand banded together to fight a bully. If a new kid decided to be a bully or step on someone’s turf, he’d better be sure of the group dynamics of the neighborhood before he started something. That small, wimpy kid on the block could have a loyal gang of twenty brutes ready to back him up in the blink of an eye.

Several months ago the Desert Messenger ran an article about bullying. I wonder if the editor of the brand new “newspaper”, the Desert Free Press, whose name I could mention, but won’t, read that article. The Desert Free Press has decided to bully its way into this community and try to stir things up. The challenge has been thrown, and the line has been crossed. Words have been printed and tactics have been used to cause people to choose a side. I have made my choice. I choose to leave the peace and quiet of the desert, metaphorically speaking, and come to the defense of my friends, some of whom have been personally attacked by this bully.
I believe strongly in a free press, but I also understand that with freedom comes responsibility. There is a fine line between free speech and slander, between fact and opinion, between reporting and ranting and raving, between citizen advocacy and personal vendettas. Both the New York Times and the National Enquirer consider themselves newspapers, but that does not mean their quality or content are equal. I could go on a rampage and take some cheap shots at this bully, but I refuse to lower myself to that level. I prefer to look bullies in the face and call things as I see them. I will, instead, let the readers choose.

The people of Quartzsite, the vendors, and the winter visitors, are intelligent, discerning citizens. We know solid decent journalism when we read it. When citizens participate in town hall meetings, ask questions, and get involved in the community, the distinction between truth and lie becomes obvious. Hearsay becomes just juicy gossip without any solid foundation. Discrepancies, distortions to the facts, and half-truths can be discerned. Armed with truth, we, the people of Quartzsite, both permanent and temporary, can decide who our friends are and who the ranting and raving bully in the community is.

In the Wild West, gun battles on Main Street were common to run a bully out of town. In my neighborhood in Philly we settled alot out in the street, too. Many times the bully showed up only to find the fight was way bigger than he expected, and had to make a hasty retreat. This winter, in Quartzsite, a bully has appeared and is trying to mess with us by dragging us into a childish game of name-calling, propaganda, cheap shots, and gossip. It will end quickly if we band together and stand up to this bully. Let’s show this bully what this town, our neighborhood, is made of. One thing about bullies is that deep down inside they are cowards. They try to get their way by bluffing their way through with scare tactics, manipulation, and tricks. They try to appear bigger and tougher than they really are. But they are cowards, and they only win when the object of their bullying allows them to win.

We didn’t start this fight. But we can finish it. So let’s look this in the eye and call it as it is. A turf-war. A bullying situation. A barrage of propaganda and manipulative half-truths. And let’s stand up for each other, join forces, and show this bully that she won’t win. Let’s show her what were made of. Let’s do it now and get it over with, so we can just get on with the business of the town and the season. And so I can get out of politics and the public forum, and go back to my peace and quiet out in the desert.
Posted by Quartzsite at 7:17 AM