Greyhound breaks down west of Quartzsite 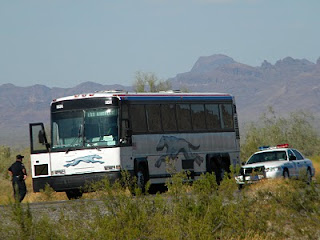 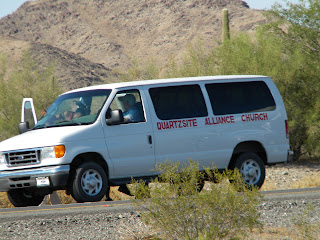 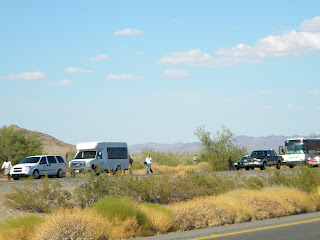 Quartzsite, Arizona - Monday, July 19, 2010 Afternoon temperatures reached 116 degrees Monday afternoon, when the Los Angeles bound Greyhound bus just stopped running as it travelled westbound on Interstate 10. The driver managed to pull it to the side of the road just a few miles west of Exit 17.
Arizona Dept. of Public Service and Quartzsite Police Department officers arrived on the scene shortly thereafter. Pastor Jeff Jones, of Quartzsite Alliance Church was listening to the scanner when officers put out a call to shuttle the passengers back into Quartzsite, and volunteered his church's 12 passenger van to help. Town of Quartzsite staff also answered the call, as the Town Transit Service van appeared on the scene. Between the two vehicles all 44 passengers were rescued from the searing desert heat and driven to McDonald's where they were given free water and allowed to cool off until a replacement bus arrived hours later. Kudos to everyone for their quick response!
Posted by Quartzsite at 2:55 PM